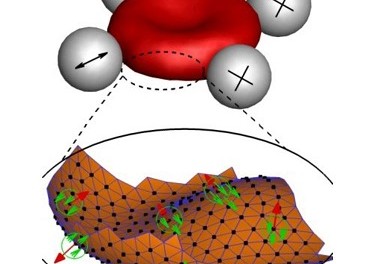 In experiments and computer simulations, researchers repeatedly deformed red blood cells, let them “wriggle,” and then analyzed their behavior. Three tiny spheres hold the cells in place during the process, while the movements of the cell membrane are measured with the help of a fourth sphere. The “wrapper” of the blood cell consists of a lipid double layer and a cytoskeleton. Active forces produced, for example, by an ion pump move the membrane (red arrows) and fluids (green arrows) locally in opposite directions. (Image Credit: Forschungszentrum Jülich [Jülich Research Centre])

An international team of researchers from the Institut Curie (Paris, France), Jülich Research Centre (Germany), and Münster University (Germany) used optical tweezers (a concentrated laser beam) to demonstrate how red blood cells move, showing that they actively “wriggle” rather than being moved by external forces. In doing so, they recognized that fast molecules in the vicinity of the cells make the cell membrane of the blood cells wriggle, but that the cells themselves also become active when they have enough reaction time.

The function of red blood cells is to transport oxygen in the blood of vertebrates. The goal of the research team was to find out more about the mechanics of tcells and gain a detailed understanding of the forces that move and shape cells. In the case of red blood cells in particular, it is important to know about their properties and their internal forces because they are unusually soft and elastic, and change their shape to be able to pass through the sometimes-minute blood vessels in our body. Because blood cells are normally so soft, physicists previously measured large thermal fluctuations at the outer membrane of the cells. These natural movements of molecules are defined by the ambient temperature—the cell membrane of the blood cells moves because molecules in the vicinity jog it. Under the microscope, this makes the blood cells appear to be wriggling.

Although this explains why blood cells move, it does not address the question of possible internal forces being a contributory factor. So, the research team—led by Timo Betz, a biophysicist at Münster University—used optical tweezers to take a close look at the fluctuations of blood cells, stretching blood cells in a petri dish and analyzing the behavior of the cell. The result was that if the blood cells had enough reaction time, they became active themselves and were able to counteract the force of the optical tweezers. If they did not have this time, they were at the mercy of their environment, and only temperature-related forces were measured.

“By comparing both sets of measurements, we can exactly define how fast the cells become active themselves and what force they generate in order to change shape,” Betz explains. “Now it’s up to the biologists, because we physicists only have a rough idea about which proteins might be the drivers for this movement. On the other hand, we can predict exactly how fast and how strong they are.”