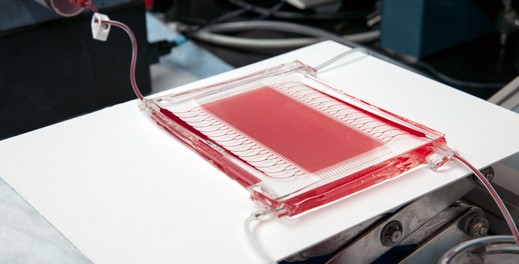 Dark red blood flows into the device, where it exchanges carbon dioxide for oxygen and emerges on the other side much brighter.

A new technology that re-creates important characteristics of structures in the lung could eventually be a safer alternative to certain types of respiratory and cardiac machines used to treat people whose lungs have failed due to disease or injury.

By using manufacturing techniques originally designed to make computer chips, biomedical engineers have in recent years made significant progress toward mimicking the mechanisms of certain organ systems, the healthy functionality of which is contingent on very precise chemical and physical conditions. Blood, for example, is extremely sensitive to environments other than the ones it encounters in healthy living systems. Now engineers at Draper Laboratory say they’ve designed a new lung therapy, composed of tiny channels molded into a biocompatible polymer that is capable of handling high blood flow rates. If things go as they plan, the therapy will be much safer than those used today.

It’s common for critically ill people to experience acute respiratory distress syndrome (ARDS), in which fluid builds up in the lungs and prevents the normal exchange of oxygen and carbon dioxide. Mechanical ventilation of the lungs, the most commonly used therapy for such patients, is akin to asking someone to “exercise a broken arm,” says Jeff Borenstein, who leads the microfluidic lung project at Draper. The invasive therapy involves forcing high concentrations of oxygen into the lungs at high pressures, and does not allow the diseased or damaged tissue to heal, he says. Even worse, it commonly leads to serious complications including lung tissue toxicity and pneumonia.

An alternative to mechanical ventilation is extracorporeal membrane oxygenation (ECMO), which entails drawing a patient’s blood and running it through a device that removes carbon dioxide and adds oxygen to it before returning the blood to the patient’s body. Traditionally, ECMO has been used mainly as a life-saving measure if mechanical ventilation doesn’t work or is impossible, and is more commonly used in children. Today’s ECMO machines, in which blood flows over a bundle of porous fibers through which oxygen is pumped, are complicated and require specialized expertise to operate. Blood tends to clot in the device, which is very unlike the environment in the lung, so patients must take large doses of anti-clotting medication. This can lead to other dangerous complications such as bleeding in the brain or gastrointestinal system.

The new microfluidic device, which is simpler in design and provides the flowing blood an environment much more like what it encounters in the lungs, could essentially replace the “guts” of conventional ECMO machines, says David O’Dowd, program manager for biomedical systems at Draper. If things go as planned, it will be ready to test in animals in two years, and ready for human testing in three, he says.

By stacking layers of biocompatible plastic with microchannels patterned on their surface, Borenstein’s team has built a “three-dimensional branching structure” in which larger channels gradually branch into smaller ones similar to the way larger blood vessels branch into capillaries.
Other research groups are also pursuing microfluidic-based gas exchange technologies, but Borenstein says his team’s device is unique in the degree to which it mimics the actual biological system—something made possible by the proprietary methods the group used to achieve the 3-D branching. While flowing through the device, blood is much less likely than it is in an ECMO machine to “think it should be clotting,” says Borenstein. It also puts the oxygen and blood into closer proximity, which allows for more efficient gas exchange compared with conventional ECMO.

This unique design is what has allowed the team to achieve blood flow rates at least 10 times faster than competing microfluidic technologies, according to Borenstein. Recently, the group demonstrated a flow rate of 100 milliliters per minute using bovine blood. Now the goal is to scale it up so it can handle liters of blood per minute without sacrificing the attributes that reduce clotting risk.

Because a device like this would be simpler, more efficient, and would not require patients to take lots of blood thinners, it could be much safer than today’s ECMO machines for long-term use, says Phillip Camp, a cardiothoracic surgeon at Brigham and Women’s Hospital in Boston who researches mechanical support systems for patients who have heart or lung failure. That could be especially useful to help people through flare-ups of common chronic lung conditions like chronic obstructive pulmonary disease (COPD). If the technology can be successfully scaled up and commercialized, he says, it has the potential to “revolutionize how we take care of folks who have acute respiratory failure.”