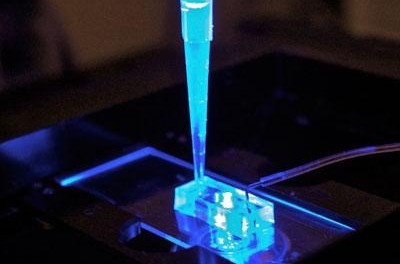 UC Berkeley researchers have created a ‘heart-on-a-chip’ that effectively uses human cardiac muscle cells derived from adult stem cells to model how a human heart reacts to cardiovascular medications. The system could one day replace animal models to screen for the safety and efficacy of new drugs. (Image Credit: Anurag Mathur/Healy Lab)

When University of California, Berkeley, bioengineers say they are holding their hearts in the palms of their hands, they are not talking about emotional vulnerability.

Instead, the research team led by bioengineering professor Kevin Healy is presenting a network of pulsating cardiac muscle cells housed in an inch-long silicone device that effectively models human heart tissue, and they have demonstrated the viability of this system as a drug-screening tool by testing it with cardiovascular medications.

This organ-on-a-chip, reported in a study to be published Monday, March 9, in the journal Scientific Reports, represents a major step forward in the development of accurate, faster methods of testing for drug toxicity. The project isfunded through the Tissue Chip for Drug Screening Initiative, an interagency collaboration launched by the National Institutes of Health to develop 3-D human tissue chips that model the structure and function of human organs.

“Ultimately, these chips could replace the use of animals to screen drugs for safety and efficacy,” said Healy.

The study authors noted a high failure rate associated with the use of nonhuman animal models to predict human reactions to new drugs. Much of this is due to fundamental differences in biology between species, the researchers explained. For instance, the ion channels through which heart cells conduct electrical currents can vary in both number and type between humans and other animals.

“Many cardiovascular drugs target those channels, so these differences often result in inefficient and costly experiments that do not provide accurate answers about the toxicity of a drug in humans,” said Healy. “It takes about $5 billion on average to develop a drug, and 60 percent of that figure comes from upfront costs in the research and development phase. Using a well-designed model of a human organ could significantly cut the cost and time of bringing a new drug to market.”

The heart cells were derived from human-induced pluripotent stem cells, the adult stem cells that can be coaxed to become many different types of tissue.

Shown is human heart tissue, derived from adult stem cells, before and after exposure to isoproterenol, a drug used to treat bradycardia (slow heart rate) and other heart problems. The beat rate visibly increased after 30 minutes of exposure to the drug. Credit: Video by Dr. Anurag Mathur/Healy Lab

The researchers designed their cardiac microphysiological system, or heart-on-a-chip, so that its 3D structure would be comparable to the geometry and spacing of connective tissue fiber in a human heart. They added the differentiated human heart cells into the loading area, a process that Healy likened to passengers boarding a subway train at rush hour. The system’s confined geometry helps align the cells in multiple layers and in a single direction.

Microfluidic channels on either side of the cell area serve as models for blood vessels, mimicking the exchange by diffusion of nutrients and drugs with human tissue. In the future, this setup could also allow researchers to monitor the removal of metabolic waste products from the cells.

“This system is not a simple cell culture where tissue is being bathed in a static bath of liquid,” said study lead author Anurag Mathur, a postdoctoral scholar in Healy’s lab and a California Institute for Regenerative Medicine fellow. “We designed this system so that it is dynamic; it replicates how tissue in our bodies actually gets exposed to nutrients and drugs.”

Within 24 hours after the heart cells were loaded into the chamber, they began beating on their own at a normal physiological rate of 55 to 80 beats per minute.

The researchers put the system to the test by monitoring the reaction of the heart cells to four well-known cardiovascular drugs: isoproterenol, E-4031, verapamil and metoprolol. They used changes in the heart tissue’s beat rate to gauge the response to the compounds.

The baseline beat rate for the heart tissue consistently fell within 55 to 80 beats per minute, a range considered normal for adult humans. They found that the responses after exposure to the drugs were predictable. For example, after half an hour of exposure to isoproterenol, a drug used to treat bradycardia (slow heart rate), the beat rate of the heart tissue increased from 55 to 124 beats per minute.

The researchers noted that their heart-on-a-chip could be adapted to model human genetic diseases or to screen for an individual’s reaction to drugs. They are also studying whether the system could be used to model multi-organ interactions. A standard tissue culture plate could potentially feature hundreds of microphysiological cell culture systems.

“Linking heart and liver tissue would allow us to determine whether a drug that initially works fine in the heart might later be metabolized by the liver in a way that would be toxic,” said Healy.

The engineered heart tissue remained viable and functional over multiple weeks. Given that time, it could be used to test various drugs, Healy said.