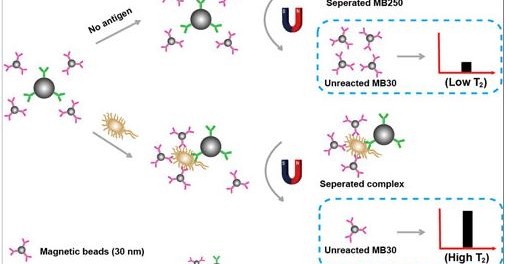 Schematic illustration of the MS-MRS sensor.MB250 andMB30 can selectively capture and enrich the target to form the sandwich ‘MB250-target-MB30‘ conjugate. After the magnetic separation, the T2 signal of water molecules around the unreacted MB30 can be employed as the readout. (Image Credit:  American Chemical Society)

Early detection of foodborne pathogenic bacteria is critical for preventing disease outbreaks and preserving public health. Unfortunately, current detection techniques such as ISO method 6579, fluorescent-antibody (FA), enzyme-linked immunosorbent assay (ELISA), or polymerase chain reaction (PCR) are time-consuming, cumbersome, and have limited sensitivity. They are inadequate as they lack the ability to detect bacteria in real time.This has led to urgent demands to develop highly efficient strategies for isolating and detecting these microorganisms in connection with food safety, medical diagnostics, water quality, and counter-terrorism.What is required are alternative platforms for the rapid, sensitive, reliable and simple isolation and detection of E. coli and other pathogens.Researchers in China have now developed a magnetic bead (MB)-based sensor that combines magnetic separation (MS) and magnetic relaxation switch (MRS) for one-step detection of bacteria and viruses with high sensitivity and reproducibility.They report their findings in the March 6, 2015 online edition of ACS Nano (“One-Step Detection of Pathogens and Viruses: Combining Magnetic Relaxation Switching and Magnetic Separation”).

“Compared to conventional assays for detection of bacteria and viruses, the MS-MRS assay is easy to operate without laborious pre-treatment, purification and can be adaptable to point-of-care tests easily,” Xingyu Jiang, a professor in chemical biology at the National Center for Nanoscience and Technology in Beijing, tells Nanowerk.Existing MRS-based approaches suffer from two problems: 1) operation is rather complex because one will have to carry out sample pretreatment before the assays; 2) many factors influence the outcome of the results and sometimes one has to know a prior what the sample is, for example, bacteria or viruses, in order to obtain the correct results.The new MS-MRS assay completely resolves this issue and the user does not need to know details about the analytes before testing. This makes it highly suitable for clinical diagnosis, environmental monitoring and food safety testing.

The MS-MRS sensor developed by Jiang and his collaborators exploits the phenomenon that a small magnetic field (0.01T, a common stationary magnet) can separate large-size magnetic beads (250 nm, abbreviated as MB250) from that small-size ones (30 nm, abbreviated as MB30). MB250 can be rapidly separated by this small magnetic field within 1 minute due to its high saturation magnetization. In comparison, MB30, that is used as the magnetic probe of MRS in this study, cannot be separated by the same magnetic field even after 60 minutes because of its low saturation magnetization.”Based on the great difference in the separation speed of MB30 and MB250, we use the transverse relaxation time (T2) of water surrounding the un-aggregated MB30 as the readout,” explains Jiang. “The more analyte, the less remaining MB30, the higher the T2.”He notes that the magnetic signal in the MS-MRS sensor is only related to the amount of the analyte in the samples, thus the MS-MRS improves upon two of the major limitations found in conventional MRS sensors:

“A point-of-care testing device that employs MS-MRS is the future,” says Jiang. “Having a mobile/wearable device that allows rapid readout of assays for biomarkers for diseases such as heart attack, cancer and diabetes would dramatically change healthcare diagnostics.”