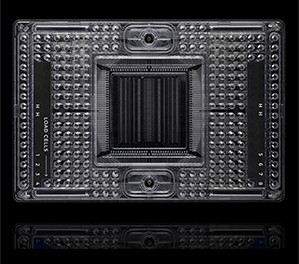 How many types of cells are there in the human body? Textbooks say a couple of hundred. But the true number is undoubtedly far larger.

Piece by piece, a new, more detailed catalogue of cell types is emerging from labs like that of Aviv Regev at the Broad Institute, in Cambridge, Massachusetts, which are applying recent advances in single-cell genomics to study individual cells at a speed and scale previously unthinkable.

The technology applied at the Broad uses fluidic systems to separate cells on microscopic conveyor belts and then submits them to detailed genetic analysis, at the rate of thousands per day. Scientists expect such technologies to find use in medical applications where small differences between cells have big consequences, including cell-based drug screens, stem-cell research, cancer treatment, and basic studies of how tissues develop.

Regev says she has been working with the new methods to classify cells in mouse retinas and human brain tumors, and she is finding cell types never seen before. “We don’t really know what we’re made of,” she says.

Other labs are racing to produce their own surveys and improve the underlying technology. Today a team led by Stephen Quake of Stanford University published its own survey of 466 individual brain cells, calling it “a first step” toward a comprehensive cellular atlas of the human brain.

Such surveys have only recently become possible, scientists say. “A couple of years ago, the challenge was to get any useful data from single cells,” says Sten Linnarsson, a single-cell biologist at the Karolinska Institute in Stockholm, Sweden. In March, Linnarsson’s group used the new techniques to map several thousand cells from a mouse’s brain, identifying 47 kinds, including some subtypes never seen before.

Historically, the best way to study a single cell was to look at it through a microscope. In cancer hospitals, that’s how pathologists decide if cells are cancerous or not: they stain them with dyes, some first introduced in the early 1900s, and consider their location and appearance. Current methods distinguish about 300 different types, says Richard Conroy, a research official at the National Institutes of Health.

Individual cells are captured and separated in bubbles of liquid, readying them for analysis.

The new technology works instead by cataloguing messenger RNA molecules inside a cell. These messages are the genetic material the nucleus sends out to make proteins. Linnarsson’s method attaches a unique molecular bar code to every RNA molecule in each cell. The result is a gene expression profile, amounting to a fingerprint of a cell that reflects its molecular activity rather than what it looks like.

“Previously, cells were defined by one or two markers,” says Linnarsson. “Now we can say what is the full complement of genes expressed in those cells.”

Although researchers determined how to accurately sequence RNA from a single cell a few years ago, it’s only more recently that clever innovations in chemistry and microfluidics have led to an explosion of data. A California company, Cellular Research, showed this year that it could sort cells into micro-wells and then measure the RNA of 3,000 separate cells at once, at the cost of few pennies a cell.

Scientists think the new single-cell methods could overturn previous research findings. That is because previous gene expression studies were based on tissue samples or blood specimens containing thousands, even millions, of cells. Studying such blended mixtures meant researchers were seeing averages, says Eric Lander, head of the Broad Institute.
“Single-cell genomics has come of age in an unbelievable way in just the last 18 months,” Lander told an audience at the National Institutes of Health this year. “And once you realize we are at the point of doing individual cells, how could you ever put up with a fruit smoothie? It is just nuts to be doing genomics on smoothies.”

Lander, one of the leaders of the Human Genome Project, says it may be time to turn pilot projects like those Regev is leading into a wider effort to create a definitive atlas—one cataloguing all human cell types by gene activity and tracking them from the embryo all the way to adulthood.

“It’s a little premature to declare a national or international project until there’s been more piloting, but I think it’s an idea that’s very much in the air,” Lander said in a phone interview. “I think [in two years] we’re going to be in the position where it would be crazy not to have this information. If we had a periodic table of the cells, we would be able to figure out, so to speak, the atomic composition of any given sample.”

Gene profiles might eventually be combined with other efforts to study single cells. Paul Allen, Microsoft’s cofounder, said last December he would be spending $100 million to create a new scientific institute, the Allen Institute for Cell Science. It will study stem cells and video their behavior under microscopes as they develop into various cell types, with the ultimate goal of creating a massive animated model. Rick Horwitz, who leads that effort, says that it will serve as a kind of Google Earth for exploring a cell’s life cycle.

The eventual payoff of collecting all this data, says Garry Nolan, an immunologist at Stanford University, won’t be just a catalogue of cell types, but a deeper understanding of how cells work together. “The single-cell approach is a way station that needs to be understood on the way to understanding the greater system,” he says. “In 50 years, we’ll probably be measuring every molecule in the cell dynamically.”