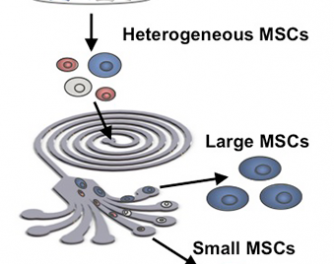 Researchers in MIT Associate Professor Krystyn J. Van Vliet‘s group last year showed that three biomechanical and biophysical markers could accurately identify the most desirable stem cells from a mixed group of bone marrow-derived cells. Now, MIT biological engineering graduate student Frances Liu is trying to advance that work by understanding how to alter the stem cells’ physical environment to get them to produce the most desirable chemical output.

The bone marrow cells secrete special chemicals called cytokines that are needed in the body to repair bone tissue, fat tissue, and connective tissue like cartilage. “These so-called factors that the cells produce are associated with those tissue growth functions and tissue repair functions,” Van Vliet says.

Liu grows bone marrow-derived stem cells and studies how those stem cells release certain chemicals in response to mechanical interactions with materials in their surrounding environment. “I would like to manipulate the cells, using cell-material interactions, or synthetic materials, to produce certain chemicals beneficial to tissue repair,” Liu explains in the Laboratory for Material Chemomechanics at MIT. “Right now we are in the characterization phase, quantifying which and how much of different cytokines the cells secrete in response to different chemical and mechanical cues that we provide. Down the line, we aim to engineer those cytokine profiles using cell-material interactions.” Liu, 24, is a third-year PhD student and expects to complete her doctorate in 2017. She received her bachelor of science degree in biomedical engineering from Brown University.

Liu is examining how various groups of stem cells differ in response to lab-controlled changes in their environment in ways that might be important for tissue repair in the body. “Frances is determining the correlations between the mechanical properties of the materials the cells interact with and the chemical factors that they produce in response to that chemomechanical coupling,” Van Vliet says.

While other researchers previously studied mechanical factors such as stiffness on the function of these mesenchymal (bone marrow-derived) stem cells, it wasn’t widely recognized that they were examining a mixed population of cells, not a single well-defined cell population. “Some of them were stem cells, but some were not,” Van Vliet says.

One way that Liu sorts her stem cells into groups is using an inertial microfluidic separation device that separates cells of large diameter cells from those of small diameter. This device was adapted from previous designs of their collaborator, MIT Professor Jongyoon Han, as part of the interdisciplinary team that Van Vliet leads within the Singapore-MIT Alliance for Research and Technology (SMART). The group showed in a 2014 paper that three markers — size, mechanical stiffness, and how much the nucleus inside the cell moves around — are sufficient to identify stem cells in a heterogeneous population of chemically similar but non-stem cells. “We measured those three properties as well as several other properties, but only those three properties together, that triplet of properties, distinguished a stem cell from a non-stem cell,” Van Vliet says.

By using the microfluidic device, we can better understand the differences between the subpopulations of these heterogeneous bone marrow cells and which cytokines each subpopulation may be secreting, both in the body and in the lab.