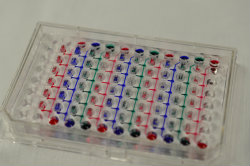 Scientists in an EU-supported project have developed a microfluidic chip that simultaneously analyses the reactions of several human organ tissues when they come into contact with candidates for new drugs. The ground-breaking device could save millions of euros in drug development costs.

One of the biggest challenges for pharmaceutical companies is reducing the multi-million-euro cost of drug development and shortening the time to market of medicines in order to fully exploit them before patents run out. This led the EU to back an early-stage research project, called Body-on-a-Chip (BOC), replacing the 2D cell culture conventionally used for drugs testing with a multi-tissue device that better mimics real-life conditions in the body, by combining several organ-specific 3D cultures into a single chip. Researchers then created a prototype BOC to assess the toxicological risk of new candidate compounds and their effectiveness prior to formal clinical testing.

‘The pharma industry loses a lot of money by keeping drug candidates in the development process for too long, only to find out at a late stage that the drug is not working,’ explained BOC coordinator, Dr Jan Lichtenberg, of Swiss startup Insphero. ‘Fail fast and fail early is the industry paradigm. They want to know the drug’s toxic liability as soon as possible to eliminate failures from their program, thus saving millions, and occasionally even billions, in attrition costs.’

Understanding the long-term toxicity of drugs

Traditionally the potential harmfulness of drugs has been tested on cells grown on plates in a 2D format. The problem with this is that 2D cell cultures can lose their functionality within about 48 hours, in the case of liver cells for instance, so the tests only reveal results for acute toxicity, i.e. drugs that would harm patients almost as soon as they are administered.

Scientists on the BOC project loaded 3D cell cultures (spheroid micro-tissues representative of human organs such as the liver or heart) into compartments connected by tiny tubes, thus mimicking the physiological context and conditions of a complex organism. Developing the 3D micro-tissues off the chip, instead of culturing them in situ, means they can last a remarkable 60 days, allowing for testing of longer-term toxicity effects.

The drug being tested passes in a nutrient solution across these various compartmentalised ‘organs’ and the plate is connected with analytical methods such as mass spectroscopy to analyse the drug metabolites produced. The BOC allows these drug metabolites to be identified and their effect on other tissues studied. The tested compound may be transformed by liver enzymes into metabolites more powerful than the original compound, but they might also be toxic. This metabolite toxicity can’t be detected by classic 2D culture.

Commercial multi-tissue device could be ready in three years

A device comprising rat cells, representing two tissue types, liver and tumour, was proven during the project. Known anti-cancer agents such as staurosporine and cyclophosphamide, and more commonly used drugs known to be toxic to the liver such as paracetamol, were passed over these tissues to test the device worked correctly.

The partners also experimented with four tissues on the same chip, representing a liver, tumour, heart muscle and neurological system, and they developed early prototypes with six and eight compartments that the project demonstrated could be extended to human cell cultures.

‘Early-stage backing from the EU has really helped us develop a robust prototype and we will be able to offer a commercial multi-tissue “body-on-a-chip” system to the market in the next two to three years,’ added Dr Lichtenberg.