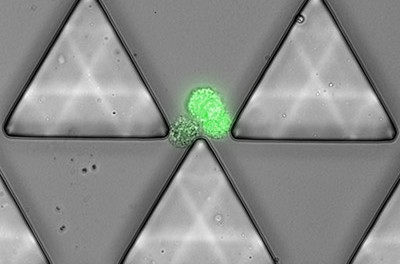 Researchers have developed a microfluidic chip that can capture rare clusters of circulating tumor cells, which could yield important new insights into how cancer spreads. The work was funded by the National Institute of Biomedical Imaging and Bioengineering (NIBIB), part of the National Institutes of Health.

Circulating tumor cells (CTCs) are cells that break away from a tumor and move through a cancer patient’s bloodstream. Single CTCs are extremely rare, typically fewer than 1 in 1 billion cells. These cells can take up residence in distant organs, and researchers believe this is one mode by which cancer spreads.

Even less common than single CTCs are small groups of CTCs, or clusters. While the existence of CTC clusters has been known for more than 50 years, their prevalence in the blood as well as their role in metastasis has not been thoroughly investigated, mostly because they are so elusive. However, recent advances in biomedical technologies that enable researchers to capture single CTCs have renewed interest in CTC clusters, which are occasionally captured along with single CTCs.

Now, researchers led by Mehmet Toner, Ph.D., professor of surgery (biomedical engineering) at the Massachusetts General Hospital (MGH) and the Harvard-MIT Division of Health & Sciences Technology, report the development of a novel microfluidic chip that is specifically designed for the efficient capture of CTC clusters from whole, unprocessed blood.

“Very little is known about CTC clusters and their role in the progression and metastasis of cancer. This unique technology presents an exciting opportunity to capture these exceptionally rare groups of cells for further analysis in a way that is minimally-invasive,” said NIBIB Director Roderic I. Pettigrew, Ph.D., M.D. “This is the kind of breakthrough technology that could have a very large impact on cancer research.”

The new technology — called Cluster-Chip — was developed with support from a Quantum Grant from NIBIB, which funds transformative technological innovation designed to solve major medical problems with a substantial disease burden, such as preventing cancer metastasis or precisely tailoring therapeutics to an individual’s cancer cell biology.

Toner and his collaborator Dr. Daniel Haber, M.D., Ph.D., also at MGH, recently used Cluster-Chip to capture and analyze CTC clusters in a group of 60 patients with metastatic breast, prostate, and melanoma cancers. The researchers found CTC clusters — ranging from two to 19 cells — in 30-40 percent of the patients. “The presence of these clusters is far more common than we thought in the past,” said Toner. “The fact that we saw clusters in this many patients is really a remarkable finding.”

Further analysis of the patients’ CTC clusters yielded new insights into the biology of CTC clusters. The researchers published their results in the May 18, 2015 advance online issue of Nature Methods.

The chip is designed to slowly push blood through many rows of microscopic triangle-shaped posts. The posts are arranged in such a way that every two posts funnels cells towards the tip of a third post. At the tip, single cells — including blood cells and single CTCs — easily slide to either side of the post and continue through the chip until reaching the next tip; however CTC clusters are left at the tip, hanging in the balance due to forces pulling them down the post in opposite directions.

To determine the efficiency of Cluster-Chip, the researchers introduced fluorescently tagged cell clusters (ranging from 2-30 cells) into the chip and counted the number of clusters that were captured and the number that flowed through undetected. At a blood flow rate of 2.5ml/hr, the chip captured 99 percent of clusters containing four or more cells, 70 percent of three-cell clusters, and 41 percent of two-cell clusters. Comparison of the clusters under a microscope before and after capture found that the chip had no negative effects on the integrity of the clusters as a whole.

The researchers next compared the efficiency of their novel chip to two currently-used methods that have had some success capturing CTC clusters. They found that at similar blood flow rates, the Cluster-Chip was significantly more efficient than a filter-based method, which pushes blood through a membrane with pores only large enough to let single cells pass through. The chip was also more efficient than a different microfluidic chip — previously developed by Toner — that isolates CTCs and occasionally clusters using antibodies that stick to special proteins found on the surface of some tumor cells.

The results highlight the importance of the unique Cluster-Chip capture technique, which is based on the structural properties of CTC clusters rather than their size or the presence of surface proteins. This latter property makes the Cluster-Chip well-suited for capturing CTC clusters from a range of cancer types, including those that lose surface proteins during metastasis and those that never express them, such as melanoma.

The researchers went on to test the Cluster-Chip in a small trial of 60 patients with metastatic cancer. In this study, the chip captured CTC clusters in 11 of 27 (40.7 percent) breast cancer patients, 6 of 20 (30 percent) melanoma patients, and 4 of 13 (31 percent) prostate patients. The large number of clusters found in the patient samples suggests a possibly greater role for clusters in the metastatic cascade. While the significance of CTC clusters has not been fully established, a previous study published by Toner and the Haber team in Cell (2014) found an association between increased number of CTC clusters in patients with metastatic breast cancer and reduced survival, and an association between the presence of clusters and reduced survival in prostate cancer patients.

To characterize the biology of the clusters, the researchers measured a marker of tumor cell proliferation — an indicator of increased invasiveness and poor outcomes — in one breast cancer patient with high numbers of both single CTCs and clusters. Approximately half of the cells in the patient’s clusters were positive for the proliferative marker, demonstrating that clusters can contain both actively proliferating and quiescent cells.

The researchers also noted the rare presence of non-tumor cells within clusters in less than 5 percent of patients. “The fact that some CTC clusters contain immune cells is of particular interest,” said Pettigrew. “Given the increasing number of cancer therapies that engage the immune system, the ability to monitor tumor-immune cell interactions via the blood could be of great value.”

Toner anticipates that the Cluster-Chip will play an important role in stimulating new research on CTC cluster biology: “It’s like poking a sleeping bear. It could really awaken the field to go after clusters and to develop even better technologies to understand their biology in cancer metastasis.”