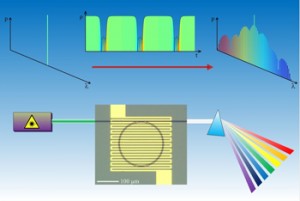 Researchers are developing “microresonators” for miniature optical sensors and other potential applications. The technology is based on the reliable generation and control of laser pulses containing a number of equally spaced frequencies called “comb lines.” This graphic depicts the optical spectrum of a “pump laser” used in the technology and an intriguing optical phenomenon called “dark pulses,” which might be harnessed to precisely control the comb lines. (Image Credit: Birck Nanotechnology Center, Purdue Univ)

The technology is based on the reliable generation and control of laser pulses containing a number of equally spaced frequencies called “comb lines.” By precisely controlling the frequency combs, including their initiation, “coherence” and spacing, researchers hope to create miniature optical devices using ring-shaped “microresonators.”

A research team at Purdue Univ. has demonstrated prototypes, and new findings are described in a paper appearing online in Nature Photonics. The findings, together with those in another paper published in Laser and Photonics Reviews, detail an optical phenomenon called “dark pulses” and show how to precisely control the comb generation.

Whereas conventional optical communication requires many lasers to transmit various frequencies, the new devices might require only a single light source, which is then transformed to emit light at multiple wavelengths. Such an innovation would reduce cost and make possible more compact optical systems small enough to fit on electronic chips, said Minghao Qi (pronounced Ming-how Chee), an associate professor of electrical and computer engineering.

“Say you have 40 channels. If we have 40 individual lasers, together with their individual control circuitry on a single telecommunication chip, then your cost is high. If one of the lasers goes down you have to replace the entire chip. You could achieve significant cost reduction if you were able to use just one laser to create multiple wavelengths to drive different channels,” he said.

The microresonators accumulate optical power, and enhance an otherwise weak effect of “optical nonlinear interaction,” which allows for the generation of numerous frequencies, Xue said. The ring-shaped device has a radius of about 100 micrometers, or the width of a sheet of paper, and is fabricated from silicon nitride, a material compatible with silicon material widely used for electronics.

Researchers had previously created “bulk optics” systems, which use mirrors, lenses and other optical components arranged on a vibration-dampened table several feet long to convert and transmit the pulsed signals. However, these systems are far too large to be practical, and the Purdue researchers miniaturized the technology, creating microresonators small enough to fit on a computer chip. However, miniaturizing the apparatus poses challenges because it is difficult to retain a property of optical fiber called “anomalous dispersion,” which makes the high frequency components of a pulse travel faster than the lower ones, and was previously considered necessary to generate the frequency combs.

“To achieve anomalous dispersion in silicon nitride microresonators ordinarily requires very thick film, which is susceptible to cracking and not practical to manufacture,” said Andrew M. Weiner, the Scifres Family Distinguished Professor of Electrical and Computer Engineering. “Here, we show how to generate the combs without anomalous dispersion, so we potentially no longer need the thick films.”

Dark pulses can be envisioned as a shutter that is normally open to allow light to pass through, but can quickly close to block the light and then open again to turn the light back on. The entire process can be as fast as 1 to 2 picoseconds, almost 100 times faster than the switching speed of the fastest computer microprocessor now available.

The technology could bring miniature optical sensors to detect and measure chemicals, ultra-precise spectroscopy for laboratory research, and optical communications systems that transmit greater volumes of information with better quality and at lower cost. The microresonators can work not only in the near-infrared range required for optical communications but also in visible and mid-infrared light needed for chemical and biological sensing.

“If you had a comb you could probe molecules at multiple wavelengths at once, so it’s faster and provides more information about the molecule,” Xue said.

Another potential application is as an “optical clock” for computers. Clocks are needed in computers to synchronize the operation of the billions of transistors in microprocessor chips.

“Because of the miniaturization this could be applied to clock signal distribution to help improve the performance of computer chips and also for telecommunication systems,” Qi said.

The technology also could be used in photonics-assisted processing of microwave signals, especially those with large bandwidth that are difficult to process using pure electronic methods.