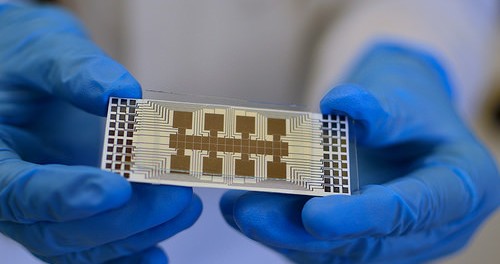 Grand Chanllenges Canada reported that a decentralized monitoring system based on DropBot and digital microfluidics will be used to test for measles and rubella immunoassays using a single drop of blood. All components of DropBot are open-source, but subject to the GPL (software code) or Creative Commons Attribution-ShareAlike licence (hardware designs).

DropBot is a Digital Microfluidic (DMF) automation system developed in the Wheeler Lab from University of Toronto. It features a modular and extensible design, an intuitive user interface, and is capable of driving up to 320 independent channels. It also provides dynamic impedance sensing which enables closed-loop control and real-time measurement of:

DropBot is built around an Arduino-based instrument and is controlled by a custom software interface called Microdrop (Fig 2.). Users can activate/deactivate electrodes on the DMF device by clicking their mouse on the webcam video overlay, providing an intuitive interface with real-time visual feedback. Sequences of actuation steps can be pre-programmed and run automatically, enabling fully automated operation. The system is designed as a loosely-coupled set of modules, which means that it is relatively easy to extend the hardware and/or software capabilities.