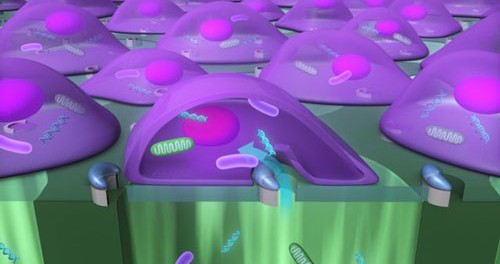 A team led by Professor Eric Pei-Yu Chiou created a tool that delivers nanoparticles, enzymes, antibodies and bacteria into cells at the rate of 100,000 cells per minute — significantly faster than current technology.

A new device developed by UCLA engineers and doctors may eventually help scientists study the development of disease, enable them to capture improved images of the inside of cells and lead to other improvements in medical and biological research.

The researchers created a highly efficient automated tool that delivers nanoparticles, enzymes, antibodies, bacteria and other “large-sized” cargo into mammalian cells at the rate of 100,000 cells per minute — significantly faster than current technology, which works at about one cell per minute.

The research, published online in Nature Methods on April 6 (“Massively parallel delivery of large cargo into mammalian cells with light pulses”), was led by Eric Pei-Yu Chiou, associate professor of mechanical and aerospace engineering and of bioengineering at the Henry Samueli School of Engineering and Applied Science. Collaborators included students, staff and faculty members from the engineering school and the David Geffen School of Medicine at UCLA.

Currently, the only way to deliver so-called large cargo, particles up to 1 micrometer in size, into cells is by using micropipettes, syringe-like tools common in laboratories, which is much slower than the new method. Other approaches for injecting materials into cells — such as using viruses as delivery vehicles or chemical methods — are only useful for small molecules, which are typically several nanometers in length.

The new device, called a biophotonic laser-assisted surgery tool, or BLAST, is a silicon chip with an array of micrometer-wide holes, each surrounded by an asymmetric, semicircular coating of titanium. Underneath the holes is a well of liquid that includes the particles to be delivered.

Researchers use a laser pulse to heat the titanium coating, which instantly boils the water layer adjacent to parts of the cell. That creates a bubble that explodes near the cell membrane, resulting in a large fissure — a reaction that takes only about one millionth of a second. The fissure allows the particle-filled liquid underneath the cells to be jammed into them before the membrane reseals. A laser can scan the entire silicon chip in about 10 seconds.

Chiou said the key to the technique’s success is the instantaneous and precise incision of the cell membrane.“The faster you cut, the fewer perturbations you have on the cell membrane,” said Chiou, who is also a member of the California NanoSystems Institute.

Inserting large cargo into cells could lead to scientific research that was previously not possible. For example, the ability to deliver mitochondria, could alter cells’ metabolism and help researchers study diseases caused by mutant mitochondrial DNA.

It also could help scientists dissect the function of genes involved in the lifecycle of pathogens that invade the cell and understand the cell’s defense mechanisms against them.

“Now it doesn’t matter the size or type of material you want to deliver. You can just push all of it into the cell,” Chiou said.“The new information learned from these types of studies could assist in identifying pathogen targets for drug development, or provide fundamental insight on how the pathogen–host interaction enables a productive infection or effective cellular response to occur,” said Dr. Michael Teitell, chief of the division of pediatric and developmental pathology, and a co-author of the paper.

Because the device can deliver cargo to 100,000 cells at once, a single chip can provide enough data for a statistical analysis of how the cells respond in an experiment.