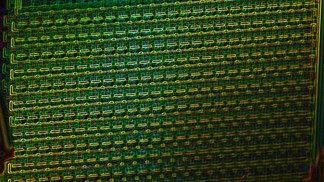 Scientists at EPFL have developed a new lab-on-a-chip technique to analyze single cells from entire population. The new method, which uses beads and microfluidics can change the way we study mixed populations of cells, such as those of tumors.

Individual cells in a population, e.g. a tumor, can vary greatly in terms of biochemistry and function. In order to fully understand and address this variability, it is necessary to profile the properties of each individual cell, such as the interactions between its DNA, RNA and proteins. This has always been a challenge due to the technical and physical limitations associated with the fragility and small size of cells, as well as the large variety yet low amount of biomolecules they contain. EPFL scientists have now combined, for the first time, affinity beads with microfluidics to produce an integrated, highly sensitive method for studying single cells that could be soon used in clinical diagnostics. The pioneering work is published in the journal Small.

There are two major obstacles for efficient single-cell analysis: first, the large number of different types of low quantity of biomolecules that have to be investigated in each cell. Second, the sheer number of cells that have to be processed, especially when trying to detect rare changes, which occur only in a few cells of a large population.

The lab of Horst Vogel at EPFL was able to overcome these hurdles by combining several micro-technologies: Micrometer- to submicrometer-sized affinity beads transferred into cells, and extraction of these beads from individual cells in a microfluidic channel. In the technique, developed by PhD student Michael Werner, the target molecule inside a single cell is captured on (sub)micrometer-sized silicon beads, which have previously been coated with capture agents, e.g. antibodies, that can bind specifically to the target biomolecule in the cell.

When taken up by a cell, the bead is first internalized in a closed intracellular cage called the phagosome. This creates a problem, as the phagosome keeps the bead from finding its target biomolecule inside the cell. In order to release the bead from the phagosome, the researchers used a photochemical trick. Along with the beads, they also incubated the cells with photosensitive molecules, which became incorporated into the phagosome’s membrane.

When light is shone on the cells, the photosensitive molecules disrupt the phagosome’s membranes. With the membranes ruptured, the beads are now released inside the cell, where they capture and extract all of the target molecules from the cell’s cytoplasm with high specificity.

Next, the bead-containing cells are put through a microfluidic chip. This is a small device designed specifically to control the flow of tiny volumes of fluids across a network of small channels (100 μm in width) etched into glass slides. The channels in this study are so narrow that cells can only pass through one at a time. The cells pass through a point in the channel where a “laser tweezer” (a highly focused laser beam) catches individual cells by interacting with their internalized beads. The trapped cells are then lysed, leaving only the beads with the bound target biomolecules in the laser trap. The beads are then analyzed directly inside the microfluidic device.

In the EPFL study, the scientists explored a number of different cell types, providing a proof of concept for their new single-cell analysis method. The team is now working with the Centre hospitalier universitaire vaudois (CHUV) in Lausanne to test their assay on cancer cells from actual tumors, which show enormous variability in signaling profiles between individual cells. “We hope that characterizing these variations will improve the treatment of the disease on an individual basis”, says Horst Vogel.