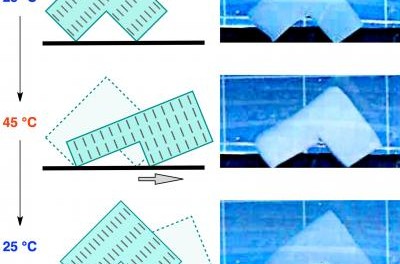 These are pictures showing the changing shape of the hydrogel as it ‘walks’ in a water environment in responses to changes of temperature. (Credit: Kim et al. Nature Materials)

In research published in Nature Materials, a team led by scientists from the RIKEN Center for Emergent Matter Science in Japan has developed a new hydrogel that works like an artificial muscle–quickly stretching and contracting in response to changing temperature. They have also managed to use the polymer to build an L-shaped object that slowly walks forward as the temperature is repeatedly raised and lowered. Hydrogels are polymers that can maintain large quantities of water within their networks. Because of this, they can swell and shrink in response to changes in the environment such as voltage, heat, and acidity. In this sense they are actually similar to the plant cells, which are able to change shape as the amount of water within them changes in response to environmental conditions.

However, most hydrogels do this very slowly, and must absorb and excrete water to either expand or shrink in volume. The unique property of the hydrogel developed by the RIKEN team is that it acts like an artificial muscle, which does not contract equally in all directions. Rather, they contract in one dimension while expanding in another, meaning that they can change shape repeatedly without absorbing or excreting water.

The secret to the new hydrogel’s property is electrostatic charge. Using a method that they published earlier this year, the team arranged metal-oxide nanosheets into a single plane within a material by using a magnetic field and then fixed them in place using a procedure called light-triggered in-situ vinyl polymerization, which essentially uses light to congeal a substance into a hydrogel. The nanosheets ended up stuck within the polymer, aligned in a single plane. Due to electrostatic forces, the sheets create electrostatic resistance in one direction but not in the other.

According to author Yasuhiro Ishida, “We originally designed this material to be stretchable in one direction, but we also found that at a temperature called the lower critical solution temperature, which we calculated to be 32 degrees Celsius, the polymer rapidly changed shape, stretching in length. Intriguingly, the gel did not change in volume. The substance underwent the change in shape in air and in a liquid environment, showing that it doesn’t require the uptake of water. So in other words, it will work even in a normal air environment.”

The team members were intrigued to find, additionally, that the process was very fast, taking just one second, with the rate of deformation, at about 70% per second, being higher than what has been seen in other hydrogels.

As a demonstration of how the polymer could be put to practical use, the group designed an L-shaped piece of polymer that can actually walk, in a water environment, as the legs lengthen and contract in response to changing temperature. The group now plans to conduct further studies to create substances that can be used in practical applications. According to Ishida, “We are now planning further work to improve the properties of the substance. One idea

we have is to use a hydrogel like this to make artificial muscles that could automatically open and close radiator systems as temperatures rise and fall. This could be used, for example, to prevent a device from overheating.”