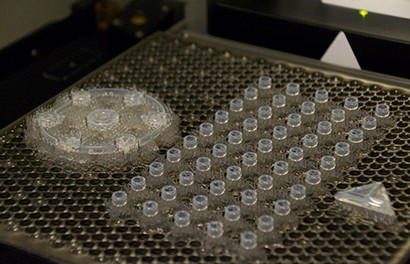 Stereolithography, or SL, emerged in the mid-1980s and established itself as a staple of additive manufacturing (AM) over the next decade. Since that time, SL’s ability to quickly and accurately create complex prototypes has helped transform the design world like never before.

As with other AM processes like selective laser sintering (SLS) and direct metal laser sintering (DMLS), SL relies on lasers to do the heavy lifting. Parts are built by curing paper-thin layers of liquid thermoset resin, using an ultraviolet (UV) laser that draws on the surface of a resin turning it from a liquid into a solid layer. As each layer is completed, fresh, uncured resin is swept over the preceding layer and the process repeated until the part is finished. A post-build process is required on SL parts, which undergo a UV-curing cycle to fully solidify the outer surface of the part and any additional surface finish requirements.

Stereolithography uses a UV laser to cure thousands of individual layers into a final part.

Unlike older generations of SL, today’s machines offer a range of thermoplastic-mimic materials to choose from, with several flavors to mimic polypropylene, ABS and glass-filled polycarbonate available. Proto Labs offers many variations of these materials:

Please note the term “thermoplastic mimic.” This is an important distinction in that the mechanical properties of SL materials only mimic those of their molded counterpart. If you need to pound on your prototype with a sledgehammer, or leave it in the sun for a few months, be aware that SL parts do not provide the same strength and durability as parts that are sintered, cast, machined or molded. This makes SL the logical choice for prototype parts where validation of form and fit — but not necessarily function — is the most important factor. Customer service engineers at Proto Labs can help guide you during material and manufacturing process selection if help is needed.

Despite differences in material properties, SL is the clear winner over SLS in terms of part accuracy and surface finish. Normal, high and micro resolutions are available, providing layer thicknesses ranging from 0.004 to 0.001 in. and part features as small as 0.002 in. This means very fine details and cosmetic surfaces are possible, with minimal “stair stepping” compared to printed parts built by processes like fused deposition modeling (FDM).

SL is also an excellent choice for prototyping microfluidic devices. Our microfluidic fabrication process allows engineers to accurately test parts that will later be injection molded, avoiding the hassles and high cost of photolithography. If you’re designing a protein sensor, micro-pump or lab on a chip, for example, SL prototyping might be just the ticket.

Stay away from extremely small holes as well, since the relatively high viscosity of the photo-curable resin used with SL can pose challenges during the post-build process. If you’re inventing a newfangled angel hair pasta strainer, one with holes smaller than 0.005 in., SL is probably not the best choice for a prototype. Thin walls should be monitored as well. The lid for a hi-tech sandwich container, for example, should have walls no less than 0.030 to 0.040 in. thick.

Bear in mind that we may create temporary structures to support your part during the build process, but these are removed prior to delivery and typically little evidence of their existence is found. We may also choose to orient the workpiece to facilitate a better build, in which case the cosmetic appearance of some surfaces can be affected — if certain cosmetic features on your part require an elevated level of surface finish, please indicate those surfaces when submitting your design.

Speaking of smooth surfaces, Proto Labs offers plenty of options for finishing SL parts. Most of our customers opt for light sanding to remove the aforementioned nibs left from supports, followed by a fine bead blast. Parts can be shipped “as is” and will show some evidence of the support structures. There are also several coating choices available — aside from the nickel SLArmor, painting (with color matching and masking services available), clear coat, texturing, and even custom decals are also possible.

As for preferred 3D CAD file formats for SL, Proto Labs accepts STL files. Most commercial CAD systems can generate STL files, the native format of any SL machine, but if yours doesn’t have this capability, our advice is to submit a neutral file format — such as an IGES or STEP file. But steer clear of the freeware STL generators littering the Internet. Some tend to create incomplete STL files, meaning additional rework time and delayed production.

SL plays an important step in the design process. It bridges the gap between digital models and machined or injection molded parts, giving people the ability to touch and feel prototype designs within days. Costly mistakes can be avoided, development costs reduced and better products built in the long run.