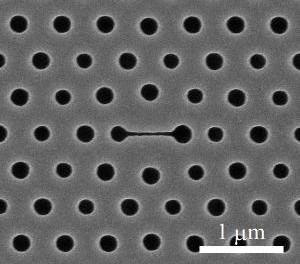 This image shows a top view of the group’s nanolaser, in which the center narrow slot (horizontal line) is the main part of the sensor. The periodic holes form a photonic crystal, and although the size of the holes appears to fluctuate they’ve been intentionally modified so the laser’s emission is effectively extracted to the top. Credit Toshihiko Baba/Yokohama National University

A simple method to sense DNA, as well as potential biomarker proteins of cancer or other diseases such as Alzheimer’s, may soon be within reach – thanks to the work of a team of Yokohama National University researchers in Japan.

As the team reports in Applied Physics Letters, from AIP Publishing, they created a photonic crystal nanolaser biosensor capable of detecting the adsorption of biomolecules based on the laser’s wavelength shift.

Equally impressive, the nanolaser biosensor enables detection of the surface charge from its laser emission intensity, which in turn can also be used to sense the adsorption of biomolecules. Using laser intensity to detect biomolecules is potentially less expensive than the fluorescent tagging or spectroscopy techniques typically used in biosensors because it is a simpler procedure.

When the team first set out to explore photonic crystal nanolaser sensors, they weren’t focusing on the intensity of the laser emission because it’s sensitive to the quality of the fabricated laser and, frankly, they didn’t expect it to show sensing signals.

“In the beginning we focused on wavelength behavior, but quickly noticed that [the laser emission] intensity is influenced by both pH and polymers,” noted Toshihiko Baba, a professor in Yokohama National University’s Department of Electrical and Computer Engineering. “Our results were very reproducible and, interestingly, we found that the behaviors of the wavelength and intensity are independent.”

The team was surprised by these results, which they discovered when they deposited a protective film of thin zirconium dioxide (ZrO2) over the device using atomic layer deposition, and then tried sensing in liquids of high or low pH and liquids containing charged polymers. The coating was necessary to protect the nanolaser from damage and unwanted wavelength drift.

So far, the team’s work is the first report of the detection of surface charges using such photonic sensors. “It enables detection of the adsorption of biomolecules from the nanolaser biosensor both in terms of wavelength and intensity,” Baba said. Since it involves different physical parameters, the researchers can examine the details of the biomolecules.

It also “enables detection of the adsorption by measuring only its intensity, which is a significant advantage compared to conventional methods,” Baba added.

One conventional biosensing method “relies on fluorescent labels that are functionalized to biomolecules in advance,” he elaborated. “We can easily see the target biomolecules by using photoexcitation, which is the de facto standard method used today in bioscience and medical diagnoses.” The downside? The functionalization process of the fluorescent labels is expensive.

For this reason, many research groups have developed label-free methods such as those using resonance in optical cavities and plasmonic states. However, these require spectral analyses using spectroscopy of wavelength or resonance optical angle – also expensive.

By contrast, the team’s nanolaser biosensor needs neither labels nor spectrometers if they use the intensity change. This greatly simplifies detection, which they’ve already demonstrated in the case of DNA.

Among the many potential applications for the nanolaser biosensor, the team hopes “to apply it to sensing DNA, biomarker proteins of cancer, Alzheimers, etc., from human bodily fluids such as blood – as a simpler procedure than any others before now,” noted Baba. “Next we’ll be investigating the sensitivity, selectivity, and stability of this phenomenon. If these issues can be cleared, it will move another step toward practical use.”

“Our research project, which runs from 2012 to 2016, ultimately targets the development of a photonic crystal nanolaser sensor for biomarker detection,” said Baba. “We’re working to further simplify and improve the sensor so that it will be ready for practical use within a few years.”