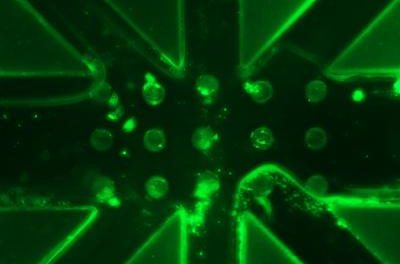 Microscope picture of the microfluidic device developed by researcher Manoj Sharma. The horizontal stripe is the microchannel, which measures 0.2 mm across. The six other stripes are optic fibers that capture the fluorescent light and lead it to a spectrometer. The 15 dots in the middle are micropillars. Courtesy of Eindhoven University of Technology.

A new microsensor could make it possible to directly monitor and adjust the composition of kidney dialysis fluid (dialysate) — an important step toward customizing dialysis to the individual patient. The sensor provides a way to monitor the salt concentrations in dialysate so that concentrations can be continuously adjusted. The ability to monitor and adjust salt levels in dialysate could lower side effects, such as heart rhythm disturbance and renal bone disease, that can be caused by use of a standard dialysate.

Researcher Manoj Kumar Sharma of the Eindhoven University of Technology developed a microsystem with a centrally positioned microchannel through which dialysate flows. He covered the walls of the microchannel with photo-induced electron transfer (PET) sensor molecules, which only fluoresce in the presence of a salt. The more salt there is in the dialysate, the stronger the fluorescence. To reinforce this effect, Sharma introduced micropillars into the microchannel to cover an even larger surface area with the sensor molecules.

It is important to ensure that the sensor molecules are not disturbed by other salts, so that a pure measurement of the concentration of a specific type of salt (in this case, sodium) is possible.

The microfluidic sensor system, which is approximately 5 × 2 cm, is now able to measure sodium accurately and live. Sharma believes that he will be able to extend the microsystem with channel sections coated with other PET sensor molecules, which will be sensitive to the other essential salts, such as potassium and phosphate.

Sharma thinks that his technique has a good chance of being used in dialysis machines. The technique is relatively inexpensive, stable, and accurate. In addition, he expects that the size of his sensor system could be further reduced, to about 1 × 1 cm, facilitating integration into dialysis machines. His technique could also eventually become part of a portable artificial kidney, a solution that could significantly ease the life of kidney disease patients.

On March 29, Sharma was awarded a Ph.D. for his research on the microsensor. Here is the public summary of his thesis.

Fluorescence: The emission of light or other electromagnetic radiation of longer wavelengths by a substance as a result of the absorption of some other radiation of shorter wavelengths, provided the emission continues only as long as the stimulus producing it is maintained. In other words, fluorescence is the luminescence that persists for less than about 10-8 s after excitation.