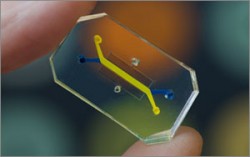 The Wyss Institute for Biologically Inspired Engineering at Harvard University today announced that its human ‘Organs-on-Chips’ technology will be commercialized by a newly formed private company to accelerate development of pharmaceutical, chemical, cosmetic, and personalized medicine products. The announcement follows a worldwide license agreement between Harvard’s Office of Technology Development (OTD) and the start-up Emulate Inc., relating to the use of the Institute’s automated human Organs-on-Chips platform.

“This is a big win towards achieving our Institute’s mission of transforming medicine and the environment by developing breakthrough technologies and facilitating their translation from the benchtop to the marketplace,” said Wyss Institute Founding Director Don Ingber, M.D., Ph.D., and leader of the Wyss Institute’s Organs-on-Chips effort. Created with microchip manufacturing methods, an Organ-on-a-Chip is a cell culture device, the size of a computer memory stick, that contains hollow channels lined by living cells and tissues that mimic organ-level physiology. These devices produce levels of tissue and organ functionality not possible with conventional culture systems, while permitting real-time analysis of biochemical, genetic and metabolic activities within individual cells. The Wyss Institute team also has developed an instrument to automate the Organs-on-Chips, and to link them together by flowing medium that mimics blood to create a “Human-Body-on-Chips” and better replicate whole body-level responses. This automated human Organ-on-Chip platform could represent an important step towards more predictive and useful measures of the efficacy and safety of potential new drugs, chemicals and cosmetics, while reducing the need for traditional animal testing. Human Organs-on-Chips lined by patient-derived stem cells also could potentially provide a way to develop personalized therapies in the future.

The technology’s rapid development from demonstration of the first functional prototypes to multiple human Organs-on-Chips that can be integrated on a common instrument platform also speaks to the Institute’s ability to translate academic innovation into commercially valuable technologies in a big and meaningful way.

The transition of the Organs-on-Chips technology to a startup was enabled by the Wyss Institute’s unique technology translation model, which takes lead high-value technologies that emerge from Wyss faculty efforts, and de-risks them both technically and commercially to increase their likelihood for commercial success. Through numerous collaborations with industry, the Wyss Institute team refined their technology, and validated it for market need and impact by testing existing drugs and modeling various human diseases on-chip. And with an eye towards creating a technology that can be mass-manufactured cost effectively outside the lab, they formed industrial partnerships to achieve this goal and increase the likelihood of success in the marketplace. Mature Institute projects are led by teams that include the lead faculty member, a technical champion with industrial experience on the Institute’s Advanced Technology Team, and a Wyss business development lead, working closely with Harvard OTD. The Organs-on-Chips project leaders included Don Ingber, Geraldine Hamilton, Ph.D., Lead Senior Scientist on the Wyss Institute Biomimetics Microsystems Platform, and James Coon, a Wyss Institute Entrepreneur-in-Residence. Hamilton and Coon will be moving to take senior leadership positions at Emulate, along with multiple members of the research team, smoothing the transition from academia to industry.