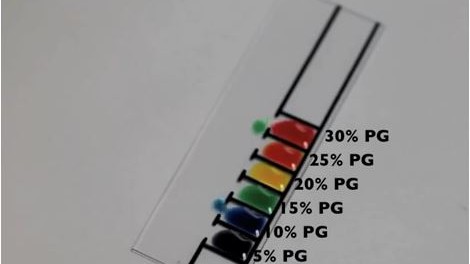 This video covers the spontaneous motion of dyed liquid droplets as they interact with one another.   After explaining surface tension’s role, the video reveals several cool examples of this surface tension dance in action. Highlights include two droplets chasing in a circle, droplets that self-sort based on surface tension, and vertical droplet bouncing reminiscent of those high striker strength tests you see at the fair.

Surface tension causes the droplets to dance, kiss, and stride along flat glass surfaces. In the video, researchers Nate J Cira and Manu Prakash (Stanford) show off just what surface tension can do: it can sort different liquids automatically, cause droplets to chase one another in a circle, and much more.

When the droplets land on the glass surface, an encompassing vapor forms around the liquid droplets, creating a thin film that sticks to the glass. When one droplet encounters this film emanating from another droplet, it starts to pull toward its new neighbor due to an imbalance in surface tension. The area on the glass between the two droplets contains the thin vapor film, making it easier for the droplets to slide toward one another.

Once two droplets come together, however, things change quickly. At this point, a surface tension imbalance between the liquid and the vapor will cause one droplet to “chase the other” and push it away.

The push and pull of the droplets reminded me of the difference between the electrostatic force — which dominates at longer distances — and the strong nuclear force — which creates a much stronger pull but only at shorter distances. Protons, for example, typically repel each other because of the electrostatic force. But the strong nuclear force keeps protons close together and latched to neutrons at the short distances seen in atomic nuclei.