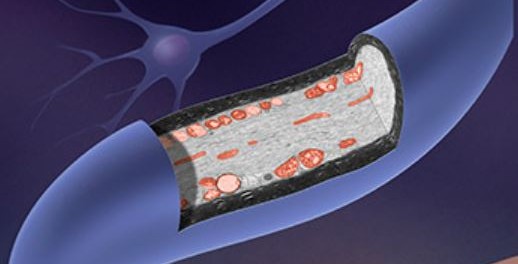 A healthy motor neuron needs to transport its damaged components from the nerve-muscle connection all the way back to the cell body in the spinal cord. If it cannot, the defective components pile up and the cell becomes sick and dies. Researchers at the National Institutes of Health’s National Institute of Neurological Disorders and Stroke (NINDS) have learned how a mutation in the gene for superoxide dismutase 1 (SOD1), which causes ALS, leads cells to accumulate damaged materials. The study, published in the journal Neuron, suggests a potential target for treating this familial form of ALS.

More than 12,000 Americans have ALS, also known as Lou Gehrig’s disease, and roughly 5-10 percent of them inherited a genetic mutation from a parent. These cases of familial ALS are often caused by mutations in the gene that codes for SOD1, an important enzyme located in the neuron’s mitochondria, the cell’s energy-producing structures. This mutation causes the death of motor neurons that control the patient’s muscles, resulting in progressive paralysis.

“About 90 percent of the energy in the brain is generated by mitochondria,” said Zu-Hang Sheng, Ph.D., an NINDS scientist and the study’s senior author. “If the mitochondria aren’t healthy, they produce energy less efficiently; they can also release harmful chemicals called reactive oxygen species that cause cell death. As a consequence, mitochondrial damage can cause neurodegeneration.”

In healthy neurons, storage containers called late endosomes collect damaged mitochondria and various destructive chemicals. A motor protein called dynein then transports the endosomes to structures called lysosomes, which use the chemicals to break down the endosomes. Dr. Sheng’s team discovered that this crucial process is faulty in nerve cells with SOD1 mutations because mutant SOD1 interferes with a critical molecule called snapin that hooks the endosome to the dynein motor protein.

“Snapin functions as an adaptor to link the dynein protein to the endosome for transport,” Dr. Sheng said. “If you block snapin function, the endosome will be stuck and the lysosomes will lose their ability to destroy damaged mitochondria.”

Dr. Sheng and his colleagues conducted their experiments in mice engineered to have an ALS mutation in their SOD1 genes. Using light and electron microscopes, the study’s co-first author, Yuxiang Xie, Ph.D., observed a buildup of damaged mitochondria in the mutant animals’ motor nerve fibers. This accumulation was present even in early stages of the disease before overt symptoms emerged.

“Mutant SOD1 mice are the best-studied models we have for ALS,” Dr. Sheng said. “The effects are very similar to the symptoms found in human patients.”

Snapin attaches dynein to the endosomes via a part of the protein called the dynein intermediate chain (DIC). In spinal cord motor neurons from the affected mice, Dr. Sheng’s team found that the altered SOD1 binds to the DIC and prevents snapin from doing so. Increasing the amount of snapin in these neurons during the early, asymptomatic stage of the disease corrected the problem and reduced the buildup of defective mitochondria. This helped the motor neurons to survive longer and slightly increased the animals’ lifespans. It also slowed down the loss of motor coordination, which worsens in animals with the SOD1 mutation as motor neurons die.

“We provide a new mechanistic link that explains why mutant SOD1 impairs endosome transport,” Dr. Sheng said. “This can provide a cellular target for future development of early therapeutic interventions when motor neurons may still be salvageable.”

Dr. Sheng’s study was the first in the ALS research field to examine endosome transport in cultured motor neurons taken from adult mice models rather than from mouse embryos. The study’s other first author, Bing Zhou, Ph.D., undertook this technically challenging innovation because adult motor neurons are a much better model for studying diseases like ALS in which symptoms develop in adulthood.

“By using adult motor neurons from the mice models, we found this transport defect,” Dr. Sheng said. “This model may be useful not only for studying ALS but also other adult-onset diseases that cause neurodegeneration.”

This work was supported by grants from NINDS (NS002946 and NS003029) and the NINDS Division of Intramural Research.

About the National Institutes of Health (NIH): NIH, the nation’s medical research agency, includes 27 Institutes and Centers and is a component of the U.S. Department of Health and Human Services. NIH is the primary federal agency conducting and supporting basic, clinical, and translational medical research, and is investigating the causes, treatments, and cures for both common and rare diseases. For more information about NIH and its programs, visit www.nih.gov.