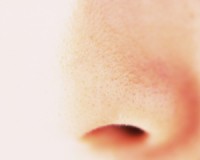 Human nasal epithelial cells, cultured on a microchip, react to air pollutants just like they would in the upper airway

The upper respiratory tract is the first line of defense against air pollutants, including allergens, bacteria and environmental toxicants. Finger-like protrusions called cilia on the surface of the human mucous membrane, or epithelium, sway back and forth when irritated. This coordinated ‘beating’ movement of the cilia helps to remove foreign materials and is an important protective mechanism.

Wei Wang and Zhi Ping Wang at the A*STAR Singapore Institute of Manufacturing Technology, De Yun Wang at the National University of Singapore and co-workers have now developed the first microfluidic device that enables the direct observation of cilia and their beating frequency on a polyester membrane1. The artificial system is used to observe the effects of air pollutants on cells in the upper airway.

The researchers constructed their microfluidic device using glass and a transparent, moldable polymer to ensure a clear view of the cilia and their activity. A membrane — designed to support the cultivation and differentiation of human nasal epithelial stem cells — was inserted into a small chamber on the device and fresh or contaminated air was fed through a tiny channel.

Five weeks after seeding the membrane with human nasal epithelial stem cells the researchers could observe the formation of beating cilia. The cilia beating frequency varied across samples but the difference was typically within a few hertz.

By enabling the observation of cilia beating frequency, the experimental model described in this work provides more realism for clinical applications. The device can be used to directly test for toxicity and toxic mechanisms, screen for drugs that reduce irritation, and assess the level of risks associated with a particular air pollutant. “The technology has applications in chemical analysis, environmental monitoring, medical diagnostics and cellular studies,” says Wang.