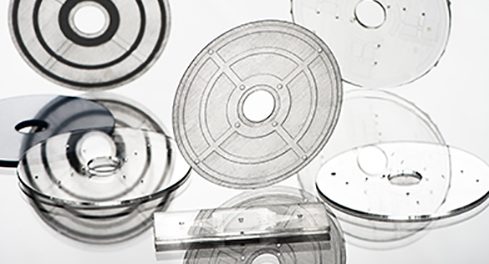 For more than a decade, scientists have publicized the potential of microfluidics to revolutionize the test and analysis of substances ranging from water to DNA. Thousands of journal articles have chronicled researchers’ development of novel microfluidic devices for diagnostic tests. Miniature, self-contained analysis systems, often referred to as labs-on-a-chip, have streamlined various assays, providing near-real-time results of analyses such as glucose or pathogen detection in blood products. Any field that relies on analyzing and identifying chemical and biological elements—for example, medicine, environmental protection, and agriculture—could benefit from the rapid, onsite assessments enabled by a lab-on-a-chip. Yet, these devices remain primarily projects found in universities and research labs not products available commercially.

Traditionally, the fabrication of microfluidic systems has required highly skilled engineers utilizing clean rooms equipped with sophisticated, expensive photo-lithography tools. Because of the specialized expertise and facilities involved in developing microfluidic devices, the commercial sector has regarded microfluidics as an impractical R&D investment into devices whose production is not scalable to industry manufacturing. However, researchers at MIT Lincoln Laboratory have proposed an alternative that could open up opportunities for the research into, and ultimately manufacture of, microfluidics.

In an recently published article in Trends in Biotechnology, David Walsh, David Kong, and Peter Carr from the Laboratory’s Bioengineering Systems and Technologies Group and Shashi Murthy of Northeastern University present a case for fabricating microfluidic platforms in makerspaces, which are typically public facilities that provide tools, such as 3D printers and laser cutters, for building myriad devices.

“You can join a makerspace for a monthly fee comparable to that of a health club membership,” Walsh says, noting that on MIT campus alone there are 28 major makerspaces in operation. “Contrast that fee to the cost of a monthly membership to a clean room, which can run from thousands to tens of thousands of dollars.”

In their article, the authors explain that 3D printers, laser cutters, and plotter cutters (machines that use digitally controlled knives to cut out designs) can take advantage of low-cost materials such as plastics, paper, and laminates. From these materials, functional microfluidic devices can be manufactured in minutes at a fraction of the cost of lithographically fabricated ones.

“We have a great opportunity to expand access to new users of microfluidics technology. From where I sit at the intersection of microfluidics and synthetic biology, I’m hoping our paper will be seized upon by community biolabs that would otherwise never get started with microfluidics,” Carr says.

The researchers have used Lincoln Laboratory’s makerspace, the Technology Office Innovation Laboratory, or TOIL, to 3D print or laser cut several variations of lab-on-a-chip devices. Their devices are geared to biomedical applications, but Walsh says that the devices could be customized for many types of assays. Pointing to one device that resembles a CD disk imprinted with a pattern of thin lines (i.e., channels for the fluids), Walsh explains that a fluid, say a biological sample, is injected through a port in the disk. The disk is then spun in an inexpensive spinner like the 6-inch-tall 3D-printed “box” on his desk, and centrifugal force “pushes” the protein through the device’s array of channels that contain reagents. The resulting reaction, perhaps a color change or a fluorescing, indicates the presence and concentration of the target biomarker for which the experimenter is testing.

“This process takes seconds,” says Walsh, highlighting one the advantages that microfluidics could bring to point-of-care diagnostics. The speed of the test, together with the small size of the device, has prompted the medical community’s interest in using lab-on-a-chip devices for personalized health monitoring, such as checking one’s cholesterol, or for diagnostics in field hospitals or clinics in disadvantaged regions that do not have ready access to laboratory facilities. However, the high costs associated with research and development of microfluidic devices have impeded the adoption of microfluidics for a broad range of biomedical assays.

Makerspace fabrication options offer the benefits of not only low cost but also fast development-test cycles. In their article, the authors illustrate a rapid prototyping approach to creating microfluidic devices: design parts with computer-aided software, cut the parts with a laser or plotter cutter, and assemble the unit by laminating the parts. Three-dimensional-printing systems enable another quick-turnaround method for fabricating microfluidic systems, and new 3D-printing techniques are making it more possible to manufacture microfluidics with high optical clarity and minimal leakage.

Another advantage to working in makerspaces is that the makerspace community boasts members with varied expertise. Fabricating prototypes in such a space negates the cost for developers to hire staff trained in the specialties required for new device production, for example, CAD designers or technicians familiar with the printing and cutting tools. “You don’t need experts in microfluidics to make the device; you just need someone who can use the makerspace tools,” says Walsh.

The authors also envision opportunities for makerspaces to enhance education in microfluidics for students from all levels. “We are excited about the education aspect,” Walsh says. “During student tours of Lincoln Laboratory, we’ve had kids try their hand at 3D printing in the TOIL. Students who get some training in microfluidics in makerspaces could develop an interest in pursuing research in the field later in their academic careers.”

David Scott, who manages the TOIL, agrees: “Having hosted a large number of outreach programs in the TOIL, I have had the pleasure of training students to design, produce, and assemble a wide variety of projects with conventional makerspace tools and equipment. By creating a microfluidics training environment in a makerspace, students would have full control of their projects while developing an interest in microfluidics through design, experimentation, and testing.”

You can read more about the specific techniques and materials that makerspaces could support for microfluidics research in the recently published Trends in Biotechnology article here.