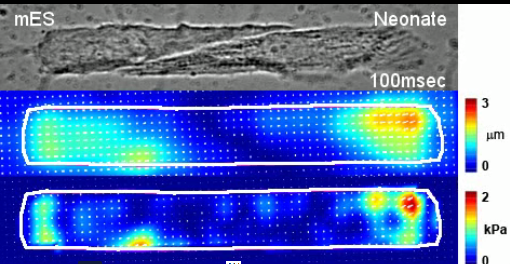 Stem cell-derived heart muscle cells may fail to effectively replace damaged cardiac tissue because they don’t contract strongly enough, according to a study in The Journal of Cell Biology. The study, “Coupling Primary and Stem Cell-Derived Cardiomyocytes in an In Vitro Model of Cardiac Cell Therapy,” by Yvonne Aratyn-Schaus and Francesco Pasqualini and colleagues, may help explain why stem cell-based therapies have so far shown limited benefits for heart attack patients in clinical trials.

The possibility of using stem cells to replace damaged heart tissue following a heart attack has interested researchers for many years. Though stem cells transplanted into patients can develop into heart muscle cells (cardiomyocytes) and integrate with undamaged regions of cardiac tissue, several pre-clinical studies and clinical trials have failed to identify significant improvements in the contractile function of the heart.

One explanation for this could be that mechanical forces are not transmitted properly between the new, stem cell-derived cardiomyocytes and the old, surviving heart cells. The mechanical forces exchanged by cardiomyocytes are impossible to measure in patients. So, a team of researchers led by Professor Kit Parker at Harvard University developed a simplified, in vitro system in which single heart cells isolated from mice are combined with individual, stem cell-derived cardiomyocytes to form a two-cell “microtissue” that the researchers call a “muscle on-a-chip.”

Using this approach, Pasqualini and Aratyn-Schaus, post-doctoral fellows in the Parker lab and co-first authors of the study, found that stem cell-derived cardiomyocytes could structurally couple, and synchronously beat with mouse cardiomyocytes. Stem cell-derived myocytes contracted less strongly than their partners, however, and this imbalance resulted in the cells transmitting mechanical forces to their surroundings, instead of to each other.

Computer simulations revealed that the unequal forces generated by stem cell-derived and native cardiomyocytes are sufficient to induce the formation of cellular adhesions that can dissipate force to the cells’ surroundings. The computer model also suggests that human cardiomyocytes are likely to behave similarly.

About The Journal of Cell Biology
The Journal of Cell Biology (JCB) is published by The Rockefeller University Press. All editorial decisions on manuscripts submitted are made by research-active scientists in conjunction with our in-house scientific editors. JCB provides free online access to many article types immediately, with complete archival content freely available online since the journal’s inception. Authors retain copyright of their published works, and third parties may reuse the content for non-commercial purposes under a creative commons license. For more information, please visit jcb.org.