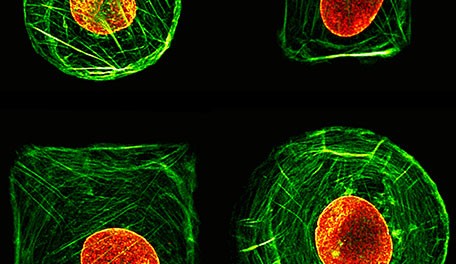 Confocal microscopy images of fibroblast cells of connective tissue. Cells were grown under controlled conditions into particular shapes using square or round islands 30-45µm in size to which cells were attached. The actin cytoskeleton of the cell appears green; the nucleus red.

Cell mechanics are considerably more complex than previously thought and may affect cell structures at various levels. This finding is based on a collaborative research project conducted by an international research team from ETH Zurich and University of Tampere, involving Teemu Ihalainen, a postdoctoral researcher at the Academy of Finland. The findings of the team were published in theNature Materials (“Differential basal-to-apical accessibility of lamin A/C epitopes in the nuclear lamina regulated by changes in cytoskeletal tension”).

The research report involved the first discovery that cytoskeletal tension transmitted to a cell nucleus causes changes to occur in the structural organisation of the nuclear envelope inner lining (nuclear lamina). These very same structures bind genetic material – chromatin – thereby enabling mechanical signals to directly affect the structure of chromatin and the reading of the genes.

“Metaphorically speaking, if we think of a cell as a tent, and the tent guy lines that keep the tent erected as the cytoskeleton, then, in line with the observations we made during our project, jerking the guy lines will change the order of objects in a backpack placed in the middle of he tent. We also found that the nuclear lamina is divided into two parts, the upper and lower parts, which are structurally different,” Ihalainen says.

From the very beginning, the project was characterised by an interdisciplinary approach which combined cellular and molecular biology with research on biomaterials. Through the use of various biomaterials, the mechanics, tension and geometry of cells could be manipulated. The tests made use of a variety of soft growth substrates (hydrogels) or, for example, various micro-islands were used to induce cells to grow into different shapes.

Cells were also manipulated mechanically with soft gel cushions. All the various methods were combined with high-resolution confocal microscopy, a method which can be used to produce precise information on cellular structures and the functioning of the nucleus.

Until now, researchers had thought that cells sense forces that they are subjected to chiefly in the proximity of the cell membrane, at points where cells are attached to their environment.

“We began this project because we wanted to discover the exact depth at which the sensing in the cell interior can still occur. For this reason, we focused on the functioning of the nucleus and the changes that it undergoes under certain conditions. The nucleus contains a cell’s genetic material, and over the last few years researchers have shown that the nucleus is attached to the cytoskeleton. This attachment enables direct mechanical tension to be transmitted from the cell surface all the way down to the nucleus. If a mechanical force can alter the structures of the nucleus, it can also affect the reading of genes and, through this, the functioning of the cell.”

Using their complex cytoskeletons, cells are able to generate mechanical forces. Such mechanical tension can be directly transmitted from cell to cell, or indirectly between cells via the extracellular matrix.

In addition to these forces, cells are subject to other forces such as the shear force and the pressure caused by osmotic phenomena.

At present, researches know that cells are able to sense mechanical forces to which they are subjected, as well as various physical properties of their environment, including rigidity and elasticity. Such mechanical signals affect the functioning of cells, including the differentiation of stem cells, the development of embryos and the birth of cancer. “However, we do not currently understand the details of this process known as mechanotransduction; for example, the mechanism through which a mechanical force affects, say, the reading of genes remains unknown.

Gaining detailed and broad-based understanding of this process would greatly facilitate issues such as the development process of biomaterials and ease their application to stem cell technology and similar fields,” Ihalainen remarks. The research report now published will contribute to this understanding.