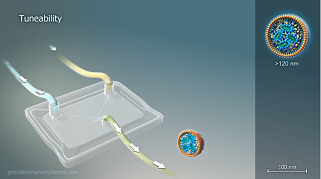 Using the unique physics of fluids at the nano-scale, the NanoAssemblr combines active ingredients — such as therapeutic strands of DNA or RNA — with complementary particles such as fatty molecules to form a kind of armoured transport. The active ingredients are encapsulated until they reach their target.

Nanomedicines were originally developed to deliver toxic molecules directly to the site of disease, such as a tumour, but not anywhere else in the body, said Pieter Cullis, director of the NanoMedicines Research Group at the University of B.C.

“That way, the drug doesn’t make you throw up or lose your hair,” he said.

But the technology has exciting applications in genetic medicine, protecting and delivering swatches of genetic material with great precision, even to a particular location within particular cell types.

Genetic medicine can turn genes on and off very specifically, for instance to stop the uncontrolled reproduction of cancer cells.

“The big challenge is getting those pieces of genetic material into cells to have their effect,” he said. “Nanomedicines are the leading technology that enables that to happen.”

Until recently, creating molecules capable of transporting gene therapies into cells has been extremely unreliable, even in tiny amounts.

But all that changed in a chance conversation between Cullis and physicist Carl Hansen, who would also become a scientific co-founder of the company.

“We were talking about something else, but I was frustrated with the standard mixing techniques and I absent-mindedly brought it up,” said Cullis. “It was completely serendipitous.”

Hansen suggested that microfluidic mixers could not only control molecule assembly and particle size, it could do so in useful volumes.

“Carl (Hansen) built a mixer and when we tried making microfluidic particles it worked like a charm,” said Cullis. “These kinds of medicines are becoming increasingly popular, so we thought we had a product that the field would snap up. It turns out we were right.”

PNI’s NanoAssemblr is capable of creating dozens of different drug candidate molecules — in a variety of different formulations and even different molecule sizes — all in a day.

Microfluidic mixing massively extends the size range of molecules that can be used as medicines, he said. Small molecules can easily penetrate cells, while others hundreds of thousands of times larger can be designed for other functions.

PNI has 70 machines in the field in 18 countries, most of them in the hands of pharmaceutical firms and university labs, all delivered with a minimal staff from a commercial space on the University of British Columbia. But the firm is now poised for rapid expansion with $13.4 million in private financing from several biotech venture capital firms and handful of individual investors.

As part of the deal, Andy Schwab, Founder and managing partner of 5AM Ventures, Deval Lashkari, senior partner of Telegraph Hill Partners, Andrew Booth, CFO Stemcell Technologies, and Joe Victor, CEO of Startide Sciences, will join existing co-founding directors James Taylor and Dan Nixon on the company’s Board. Victor will take the role of executive chairman.

UBC’s commercial spinoff office filed patents for the enabling technology and licensed it back to the company upon start-up.

One of the chief selling points of the PNI system is its ability to scale up production of a drug from the very small amounts needed for initial testing to larger volumes required for clinical trials and commercial production.

“We deploy the technology as a suite of instruments that the end user uses to develop drug candidates and they may do many many iterations to find the right combinations and molecules,” said Taylor.

For larger amounts, the same nano-scale microfluidic mixing vessels used to create the candidate molecules are duplicated many times over and run in parallel.

“Usually, companies have to re-engineer their process at each increase in volume, so that is a big-value proposition for our users,” he said.

Several new drugs developed with the system are entering clinical trials, according to Taylor.

But because the machines have only been available since 2013, it may be many years before the first drugs created through PNI’s microfluidics technology reach the market.

New drugs often take up to a decade to get through clinical trials and regulatory approval.