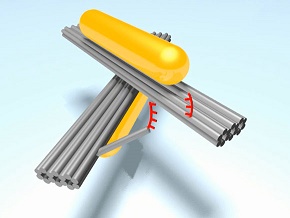 This scissor-like nanosystem consisting of bundles of coiled up DNA (grey) measures only a few nanometers. In visible light, the two DNA ends (red) sticking out of the bundles are linked up with each other. When the researchers switch on the UV light, the system opens up. They can measure the opening and closing with the aid of physical changes within the two gold rods (yellow).

Scientists at the Max Planck Institute for Intelligent Systems have developed a nanoplasmonic system in the form of a pair of scissors that they can open using UV light.

Nanomachines could take over a variety of tasks in future. Some day they may be able to perform medical precision work in the human body or help analyze pathogens and pollutants in mobile laboratories. Scientists at the Max Planck Institute for Intelligent Systems in Stuttgart have now presented a possible component which could be used to specifically move and control such a machine. They have developed a nanoplasmonic system in the form of a pair of scissors that they can open using UV light. As soon as they irradiate the nanostructure with visible instead of UV light, it closes again. The researchers can observe the structural changes with the aid of gold particles which they excite with the light.

Animal and plant cells, as well as bacteria store the information about their complete structure and all vital processes in their DNA. In nanotechnology, it is not the ability of DNA to carry the genetic make-up which scientists use, but its elastic structure. This allows them to build components of small machines, such as motors and other tools.

In order to be able to design complete nanomachines, however, scientists must design and further develop possible subunits of a machine step by step. Researchers from the Max Planck Institute for Intelligent Systems together with colleagues from Japan and the USA have now developed a structure made out of DNA that could serve as moving components of a nano-motor or nano-gearbox. Like the two blades of a scissors, they have two DNA bundles connected by a type of hinge. Each bundle is only 80 nanometres long and each consists of 14 strands of coiled up DNA lying parallel to each other. Initially, the motion of the scissor-like nanostructure is blocked by a type of chemical padlock made of azobenzenes, which can be opened by UV light.

The nanoplasmonic system consists of DNA and is closed via visible light. The two DNA bundles (grey) are held together by a small molecular padlock which consists of two protruding DNA ends (red). Embedded in it are azobenzenes which change their structure when excited by UV light (purple). This causes the two DNA bundles to separate from each other and the angle between the two DNA strands opens up. Researchers can detect this structural change using spectra obtained from so-called circular dichroism (CD) spectroscopy (top right), in which changes to the plasmons on the small gold rods (yellow) leave characteristic traces. When the researchers switch off the UV light with the system in the open state and switch on visible light (vis), the azobenzene changes its structure and the two DNA ends link up again.

The chemical padlock is opened by light

The researchers can observe live how the nanostructure opens and closes. To this end, they have linked up the DNA nanotechnology with so-called nanoplasmonics: a research field that deals with the oscillations of electrons – so-called plasmons – at a metal surface. The plasmons can arise when light impinges on a metal particle, and leave behind a characteristic signature in suitable light.

The Research Group led by Laura Na Liu has generated these plasmons on two tiny gold rods, each sitting on one of the two bundles of DNA. Using the analogy of the scissors, these two gold particles each lie on the outer side of a scissor blade and cross over like the DNA bundles at the hinge of the scissors. The light excitation causes not only the molecular padlock fixing the two DNA bundles together to spring open, plasmons on the gold particles also start to oscillate. When the scissor-like structure opens, the angle between the two gold rods changes as well, which has an effect on the plasmons. The researchers can observe these changes spectroscopically by irradiating the nanosystem with light with suitable properties and measuring how it changes. They can thus even determine the angle between the DNA bundles.

“We have succeeded for the first time in controlling a nanoplasmonic system with light. And this was precisely our motivation,” says Laura Na Liu. The researcher and her colleagues had previously worked on nanosystems that can be chemically controlled. However, the chemical controls are not as clean and leave residues in the system.

Laura Na Liu already has an application in mind for the light-controlled scissor design. The system could serve as a tool to control the arrangement of nanoparticles. “As the angle between the two DNA bundles can be controlled, it offers the possibility to change the relative position of nanoparticles in space,” says Laura Na Liu. Moreover, the scientists consider the current work as a step towards a nanomachine. The nanoplasmonic system could be part of such a machine.