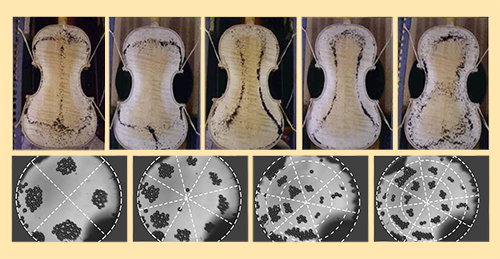 A thin vibrating plate can organize microscopic particles within a liquid into different patterns, an effect like that observed in 18th century studies of musical instruments.

Figure 1: (Top) When dark particles are placed on the back of a violin vibrating on resonance, the particles move to the vibrational nodes. The resulting patterns, known as Chladni figures, depend on the vibrational frequency and provide a visual manifestation of each resonance. (Bottom) Poulain and colleagues [1] observed Chladni patterns when they placed microparticles within a liquid above a thin oscillating plate in a microfluidics device. Because of the fluid dynamics in their device, the particles were, unlike the particles on the violins, transported away from the nodes (dashed white lines) and towards the vibrational antinodes

In the late 18th century, the German physicist and musician Ernst Chladni pioneered the study of acoustics with an elegant technique. He would sprinkle sand over a solid plate, then draw a violin bow against the plate’s edge to make it vibrate. Each time his bow struck a different resonant vibration in the plate, the sand would move to the nodal lines, forming a distinct pattern. Chladni realized that the emerging patterns could help in the design of musical instruments, allowing the identification of the resonant modes that give a violin its unique sound (Fig. 1, top). These patterns, known as Chladni figures, involve intricate physics, and they have had a correspondingly rich history. Cédric Poulain of the University of Grenoble Alpes, France, and colleagues have now added a new chapter to this story with their finding that microscopic particles in a liquid can be organized into a regular pattern by an underlying thin “drum” that vibrates [1]. The study reveals the potentially useful ways in which sound waves can generate fluid flows that order and move objects over a wide area.

The formation of Chladni figures raises two separate questions about the physics of vibrating objects. The first is central to the study of elastic materials: Where will the nodal lines appear on a plate with a particular shape and for a given reasonance? Robert Hooke studied the problem as early as 1680 by drawing a bow against the edge of a glass plate covered in flour, an experiment that inspired Chladni’s work with sand a century later. But the correct theoretical approach to addressing this question did not begin to emerge until the early 1800s, when Sophie Germain responded to a challenge, issued by the Paris Academy of Sciences, to find a mathematical explanation for Chladni figures. (Her contributions eventually earned her the first prize ever awarded by the academy to a woman.) Germain’s theory was advanced to its current form by Horace Lamb, who showed that while the resonant vibrations of an elastic plate may produce musical harmony, they are mathematically biharmonic (that is, they are the eigenfunctions of the so-called biharmonic operator).

The second question raised by Chladni patterns is relevant to the modern technology of microfluidics: What forces does a vibrating plate generate on particles placed above its surface or within a fluid that lies above it? At first blush, the answer might not seem too complicated. If the particles bounce on a plate that vibrates rapidly (accelerating faster than gravity), then they will tend to impinge the oscillating surface at its crests and bounce toward the nodes. This simple picture explains the motion of the sand that Chladni first studied. But he also observed that finer particles, shed by his bow, would migrate in the opposite direction, toward the antinodes. Clearly, more than just the bouncing mechanism was at play.

That other transport mechanism is called acoustic streaming, and it describes a situation in which a vertically vibrating plate sets up a steady lateral flow of fluid along its surface. Michael Faraday first described his observations of this puzzling phenomenon in 1831 [2], and in 1884 Lord Rayleigh offered a theoretical explanation [3]. The key to understanding it is the nonlinearity of the Navier–Stokes equations, which describe the dynamics of a fluid [4]. For a slowly vibrating plate, the equations are essentially linear, and its solutions predict that the fluid’s motion on the plate’s way up will reverse itself on the plate’s way down, with no net flow. But nonlinear terms become important for a rapidly vibrating plate, and they break the symmetry between the plate’s rise and fall. The resulting fluid dynamics is complex but it resembles the motion of a conveyor belt, flowing along the surface from an antinode to a node before rising and flowing back toward the antinode. This cyclic motion can transport particles in the liquid to the antinodes. Acoustic streaming is driven by the transfer of momentum from sound waves to a viscous fluid, and it can be thought of as the reverse of the process by which air flow generates vibrations in a musical instrument.

Microfluidics is a new frontier for acoustics, and streaming effects have, for example, been harnessed in devices that use surface acoustic waves to pump and mix fluids [4]. Poulain and colleagues have found a new application by emulating Chladni’s classic experiment, but with microbeads within a fluid instead of sand. The device that they fabricated consists of a thin polysilicon plate stretched, like the skin of a drum, across a roughly 1-mm-diameter circular opening at the base of the device. They used a piezoelectric material to excite vertical oscillations in the plate from below. They then filled their device with water containing polystyrene beads and, with a camera attached to a microscope, they recorded the positions of the beads above the vibrating drum.

The locations of the nodes and antinodes in a resonant circular plate are well known from the theory of elastic materials. So when the plate began to resonate, it was immediately clear that the beads were collecting at the antinodes, forming “inverse” Chladni figures (Fig. 1, bottom). As explained, this migration towards antinodes is a hallmark of particles being carried in acoustically generated fluid streams, and the authors were able to rule out alternative explanations. Achieving this result was no small feat, because the streaming effect in a liquid is only observable within a restricted window of experimental parameters. First, the buoyancy of the beads has to closely balance their weight. Second, the plate has to be sufficiently wide and thin that its resonant vibrations have large amplitudes and produce high vertical accelerations. The authors also noticed that tuning the driving frequency away from a resonance coaxed the particles to move in regular formations (see Video 1). This motion begged to be anthropomorphized, and the authors duly likened it to the farandole, a traditional French folk dance.

The emergence of inverse Chladni figures in a microfluidic device suggests interesting technological applications. Acoustic waves can be used to organize objects into well-defined patterns over a relatively wide area, and then to change the patterns by simply tuning the frequency of the waves such that they strike a new resonance. One could imagine, for example, using the waves to group cells into small colonies and then adjusting the wave frequency to change the size and distribution of the colonies to influence their development. It is fun to think of other possibilities and to realize that a discovery that was made by Hooke over three hundred years ago, which later profoundly influenced the development of musical instruments, has reappeared in a microfluidic device.

This research is published in Physical Review Letters.

Author: Derek Stein is associate professor of Physics at Brown University, where he joined the faculty in 2006. He received a B.Sc. in physics from McGill University in 1997 and a Ph.D. in applied physics from Harvard University in 2003. His research interests include nanofluidics, nanopores, polymer physics, and the development of techniques for analyzing DNA and proteins at the level of single molecules. He is also interested in sustainable architecture and the development of energy-efficient construction materials and techniques. He served as the Brown faculty advisor to the Brown/RISD/Erfurt Techstyle Haus team that competed in the 2014 Solar Decathlon Europe.