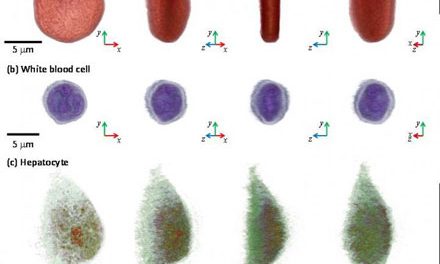 The research group of professor YongKeun Park of the Korea Advanced Institute of Science and Technology (KAIST), along with the startup TomoCube, founded by Park, built the system, which they described as the optical analogy of x-ray computed tomography (CT). The microscopic tool, called holotomography (HT)-1, uses laser illumination whereas x-ray CT uses x-ray beams.

From the HT-1’s measurement of multiple 2D holograms of a cell, coupled with various angles of laser illuminations, the 3D refractive index (RI) distribution of the cell can be reconstructed, the team said. The reconstructed 3D RI map provides structural and chemical information of the cell including mass, morphology, protein concentration and dynamics of the cellular membrane.

Among other applications, the team reported on use of the HT-1 for simultaneous 3D visualization and position tracking of optically trapped particles. The research was published in Optica, a publication of The Optical Society (OSA), (doi: 10.1364/optica.2.000343).

Park said that current fluorescence confocal microscopy techniques require the use of exogenous labeling agents to render high-contrast molecular information, which can lead to high preparation times, photobleaching and phototoxicity, as well as interference with normal molecular activities. Immune or stem cells that need to be reinjected into the body are particularly difficult to employ with fluorescence microscopy.

The Seoul National University Hospital in Bundang and Boramae Hospital in Seoul, are using the HT-1, and Park expects that tomographic microscopy will be more widely used in future in pharmaceuticals, neuroscience, immunology, hematology and cell biology.