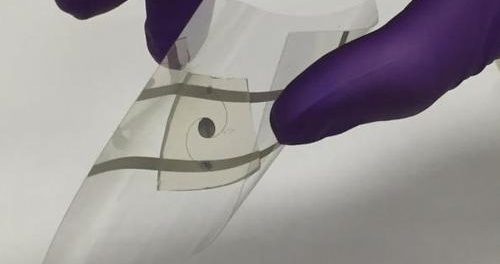 Researchers from the National University of Singapore have devised a thin and flexible pressure sensor that not only measures compression loads from a very wide range (2 kPa to 400 kPa) but can also distinguish bending or stretching loads.

The passive sensor consists of 80μm thin ‘S’-shaped microfluidics connecting a central circular pocket, 5mm in diameter, with two side circular regions (2.5mm in diameter), all filled with the eutectic fluid metal GaIn (eGaIn). Molded out of soft silicone rubber bonded to a PET film with two strips of screen-printed silver electrodes running through the side circular regions, the sensor is both rugged and flexible. The use of an electrically conductive liquid metal means the sensor won’t suffer from cracking or material fatigue.

When one applies a load on the central region, the rubber deforms and the liquid metal flows away into the side pockets, gradually changing the overall resistance of the assembly as the load increases. Readout circuitry is simple, resistance changes can be measured using a standard Analog to Digital Converter (ADC), without requiring any signal amplifications.

In their report “Triple-State Liquid-Based Microfluidic Tactile Sensor with High Flexibility, Durability, and Sensitivity” published in ACS Sensors, the researchers justify the S-shape with better fluid dynamics within the device and also observe a higher and sharper deformation profile as compared to the straight microfluidic structure, indicating a higher localized load sensitivity of the ‘S’-shaped microfluidic structure.

The scientists then submitted their sensor to various mechanical loads, from a light finger touch to foot stomping with and without shoes, or with high heel shoes. 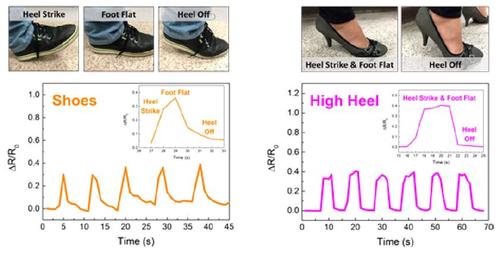 Submitting the sensor to walking shoes. The sensor yields characteristic electrical responses corresponding to the distinct movements of heel strike, foot flat, and heel off.

They even drove a car over it. Making the most of the device’s flexibility, they also carried out a battery of bending tests, showing that one could easily distinguish from -90°, -45°, +45°, and +90° bends (the fold being localised to the central region).

They noted that subtle differences could be made in foot stepping, the sensor identifying particular motion characteristics from different gaits. Corresponding author Prof. Chwee Teck Lim sees many applications in wearables.

“We are considering commercialization and have filed a patent for this invention, as well as talking to several potential users, mainly from the hospitals and clinics”, he wrote EETimes Europe.

Talking about differentiation and how this new type of sensors would compete with other thin film flexible sensors, Lim says: “The most competitive advantage of our liquid-based sensor is that it enables extreme mechanical deformity and does not exhibit plastic deformation and fracture as compared to solid sensors. Another advantage is that we are able to differentiate between gentle pressure and large pressure without needing to do additional signal processing or amplification”.

“A third advantage is that our sensor can sense various modes of loadings, e.g. bending, twisting, pressure and stretching as compared to some of the sensors which can only measure one mode of loading, e.g. pressure only”, wrote Lim, adding that his team has demonstrated other modes of loading in other publications.

Visit the National University of Singapore at www.nus.edu.sg