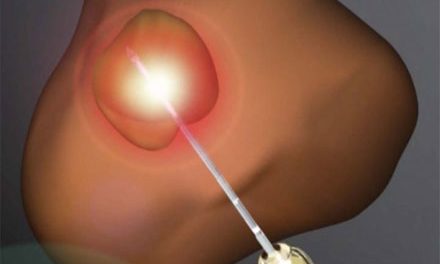 An illustration of how laser ablation is used to treat prostate cancer. (Image credit: UCLA)

A novel fusion-imaging technique uses magnetic resonance imaging (MRI) to guide the insertion of a laser fiber into a cancerous tumor. The laser, once inserted, applies heat to the cancerous tissue, destroying it. This technique, known as MRI-guided focal laser ablation, could improve treatment options and outcomes for men with prostate cancer.

In a Phase 1 study, researchers at University of California Los Angeles treated prostate cancer patients using vascular targeted photodynamic (VTP) hemiablation. Light energy, fiber number, and WST11 dose were escalated to identify optimal dosing parameters. After treatment the men were evaluated by MRI and biopsy. Prostate-specific antigen, light dose index — defined as sum of fiber length/desired treatment volume — toxicity, and quality of life parameters were recorded; 73.3 percent of the men had a negative biopsy in the treated lobe. The researchers found no serious adverse effects on urinary or sexual function or on overall quality of life six months after the procedure.

A follow-up study showed potential for offering this treatment in a clinic setting using a fusion device, called Artemis, which combines MRI and ultrasound for real-time imaging. The second study tested the fusion-MRI procedure in a clinical setting. The researchers found the procedure was well-tolerated under local anesthesia and resulted in no side effects. At four months follow-up, the patients showed no changes in urinary or sexual function.

If the technique proves effective in further studies, it could provide a safe and effective treatment for men with intermediate risk prostate cancer.

“Our feeling was that if you can see prostate cancer using the fusion MRI and can put a needle in the spot to biopsy it, why not stick a laser fiber in the tumor the same way to kill it,” said Dr. Leonard Marks, professor of urology and director of the UCLA Active Surveillance Program. “This is akin to a lumpectomy for breast cancer. Instead of removing the whole organ, target just the cancer inside it. What we are doing with prostate cancer now is like using a sledgehammer to kill a flea.”

Until now, capturing an image of a prostate cancer has been difficult, making precise, noninvasive surgical treatment a challenge. MRI improves the ability of physicians to perform precise, laser-based treatment. The novel fusion-imaging technique increases precision further by providing real-time ultrasound that delineates the tumor more clearly. When laser ablation is combined with fusion-imaging, the potential of laser ablation increases significantly. Traditionally, prostate cancer has been treated with surgery and radiation, which can result in serious side effects such as erectile dysfunction and urinary incontinence.