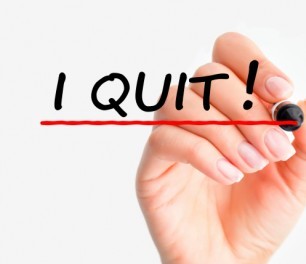 Keeping emotions in check, particularly when you are fed up at your job, can be tough to do. But if you let it get the best of you and quit in anger or in a rage it can come back to bite you.

Lots of people at some point have fantasized about taking a page from Steven Slater, the Jet blue flight attendant who quit over the plane’s public address systems, grabbed two beers and made his exit by deploying the evacuation slide. But following in his footsteps can actually end up torpedoing your career. After all Slater was arrested for his actions and had to pay Jet Blue restitution.

“As much as you feel justified (by rage quitting) you create an illusion that you are the fly off the handle kind of person who can’t keep emotions in control,” says Brie Reynolds, director of online content at FlexJobs. “For future employers you’ll look like somebody you can’t be trusted to keep themselves composed.”

Not only will rage quitting tatter your reputation but it will also be something that stays with you for years to come. Anytime you are on an interview you are going to have to explain your sudden departure and if you work in a specific industry potential employers may have gotten wind of it already.

While it make be hard to control your emotions, especially if you have taken a lot from your current employer, there are ways to temper your reaction and protect your brand. From taking a step back to creating an internal check list, here’s a look at five ways to prevent your emotions from causing you to quit.

Chances are if you are contemplating quitting out of anger and frustration, it’s not the first time you’ve felt that way about your current job situation. One way to prevent yourself from losing it, says Reynolds, is to identity your triggers ahead of time. Let’s say it’s your micro managing boss asking for a status update every ten minutes that gets you in a rage. If you know he or she can be a catalyst for your departure you’ll figure out ways to deal instead of quitting. “Take into account every time you feel tense and frustrated,” says Reynolds. “If you know that sort of thing is coming you are more likely to be able to control yourself.”

2. Take all your sick and vacation days

Feeling fed up can ebb and flow depending on your state of mind, which is why Kathy Harris, managing director of recruiting firm Harris Allied advocates taking all of your available time off to reflect before letting your emotions rue the day. Use that time off to tweak your resume, think about what you want to do with your career and look for a new job. Cooling your heels for a couple of days or a week may be all you need to get your emotions back under control.

3. Think about it from a financial perspective

Quitting may feel good in the moment but if it means you can’t make your rent, put food on the table or otherwise pay your bills it will hurt over the long run. Because of that, Ben Peterson, CEO and Co-Founder of BambooHR, says one way to calm yourself is to think about how quitting will impact your finances. “You don’t sell a car and then try to figure out what car to buy next,” nor should you resign from your employer without having a plan B. If necessary Peterson says to self-impose a rule that you can’t make employment decisions without a 72 hours cooling off period.

4. Talk it over with an alley or mentor

If your boss or co-worker gets you in a rage a way to prevent it from getting ugly is to talk yourself down with a mentor or alley, says Harris. “Sometimes all it takes is to have someone to talk to,” she says. Be careful that the person you are venting to is trustworthy. After all things can get even worse if your alley repeats everything you said.

A tried and tested way to calm an irate toddler or child is to put him or her in a time out. For adults who are thinking of quitting in a fit of anger a time out can work for them too. While it may not be feasible to sit on a naughty chair staring at the wall for ten minutes, Reynolds says taking deep breadths or having a place to go whether it’s for a walk around the block or in the bathroom can go a long way in calming you down. “If you feel like you might be on the verge of rage quitting go to the lobby or walk around the block,” says Reynolds. “Remove yourself from the situation.”