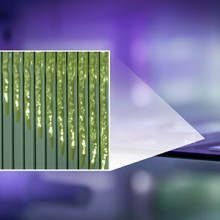 Asymmetrical growth is a property of many types of cells in organisms as diverse as algae, fungi, plants and animals. Among the organisms that employ asymmetrical growth are bioenergy-relevant filamentous fungi. Cells from filamentous fungi often resemble a long tube with a slightly tapered tip, where new materials are added during growth. A recent study demonstrated a novel microfluidic system for tracking long-term polarized cell growth, nuclear dynamics and changes in gene expression for filamentous fungi as a way to visualize these highly regulated and environmentally-controlled processes with better clarity.

Because fungi produce enzymes that degrade plant cell walls, understanding their growth and how they respond to changes in their environment is critical for developing efficient strategies for breaking up woody material for bioethanol production. Many fungi also have the ability to increase productivity of bioenergy crops such as switchgrass through mutually beneficial relationships. Demonstrating a robust, high-performance microfluidic system for visualizing single cell dynamics could lead to a deeper understanding of cell growth, chemical sensing and communication in fungi and other organisms relevant to bioenergy applications, and pave the way for the development of efficient strategies for biofuel production, bioenergy, biotechnology and medicine.

As part of the Mesoscale to Molecules In-situ Bioimaging project at Pacific Northwest National Laboratory (PNNL), which is sponsored by the Department of Energy’s Office of Biological and Environmental Research, researchers from EMSL, the Environmental Molecular Sciences Laboratory, constructed a microfluidic device consisting of separate channels for growing individual hyphae—the long, branching, filamentous units making up fungi. To precisely control the cell microenvironment, the team incorporated additional channels in the device for delivering chemicals such as buffer, media and reagents. Using live-cell imaging and fluorescent fusion protein technologies available at EMSL, researchers examined the growth of arrays of individual hyphae, the organization and migration of nuclei, and long-term changes in gene activity in response to glucose starvation and switching of the carbon source from glucose to xylose. The microfluidic device was built at EMSL, a DOE national scientific user facility.

The microfluidic system enables observations of polarized growth with enhanced chemical, temporal and spatial control over prolonged periods. Up to 50 hyphae can be simultaneously monitored in a semi-automated fashion while controlling the level of hyphal branching to match experimental need. Furthermore, the layout of the microfluidic platform allows stable and robust long-term operation. Together, these technological improvements empower detailed examination of cell-to-cell variability, distribution and movement patterns of intracellular organelles, long-term gene expression changes at different developmental stages and at specific cellular locations, and cellular responses to well-defined environmental signals and chemical stimuli.

Moreover, the system has built-in tunability and versatility to accommodate a variety of scientific applications requiring precisely controlled environments. Although the microfluidic device is demonstrated for filamentous fungi, the technology is immediately applicable to a wide array of other cell types for novel investigations aimed at revealing characteristics and mechanisms of long-term polarized cell growth. In the future, this technological advance may prove invaluable for development of efficient strategies for biofuel and other commodity chemical production and could stimulate additional medical and biotechnology applications.

Indirectly, this research can be traced back to the research interests of former PNNL Director, Dr. William R. Wiley, who was a key proponent of the establishment of EMSL. Dr. Wiley came to PNNL (Pacific Northwest Laboratory at the time) to work on Neurospora, a filamentous fungus, and he published a number of papers on amino acid and sugar transport in this organism. His research legacy continues today in the user facility that bears his name. ReadEMSL’s Evolution for more information. Contact: Ryan Kelly, ryan.kelly@pnnl.gov