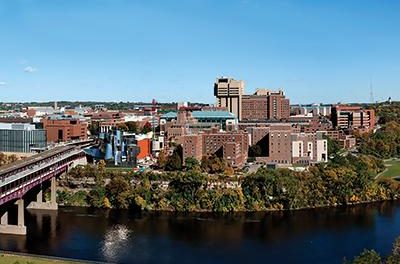 Hubel’s device touts the ability to quickly “wash” thawed blood of glycerol preservatives that are added before freezing, using a low-cost automated system to replace the time-consuming and labor-intensive centrifuge-based equipment that has been the standard for blood washing for many years.

The use of centrifuges to “de-glycerize” cryopreserved red blood cells also typically results in high levels of cell loss, which Hubel’s invention claims to reduce by employing a novel method of diffusing the preservatives out of the blood as it flows through the device. The result, borne out by federally funded studies, is much greater volumes of blood washed via automation, done more safely and at a lower cost.

In a big picture sense, the microfluidics device is aimed at furthering the goal of creating and preserving large strategic stores of blood manufactured from stem cells. Such reserves could be kept on hand when donated supplies run low or if needed in cases of large-scale emergencies, but those prospects have always been hampered by the costly and laborious process of washing large amounts of thawed blood.

Bischoff’s current company is called Headwaters Innovation Inc., based in Red Wing. The Phase I Small Business Innovation and Research (SBIR) grant was awarded to the firm in September.

An expert consultant in product development as well as an engineer, Bischoff is the owner of 12 patents. In 2003 he co-founded Mendota Heights-based Healthsense, which makes a remote monitoring system that alerts caregivers to changes in the behavior of elderly patients. Before that, he held management positions with Emerson Process Management and Honeywell, managing the latter’s global Control Products business unit.

He is also currently teaching a course on new product design and development at the University of St. Thomas.

Contacted by TCB, Bischoff declined to comment on the blood washing device project, citing the sensitivity of the current stage, but confirmed the SBIR grant is indeed related to commercialization of technology invented by the U of M’s Hubel, who is hailed as one of the country’s leading experts and innovators in cell and tissue preservation.

She is currently the director of the Biopreservation Core Resource (BioCoR), a national resource in biopreservation based at the U of M that serves hospitals, biobanks, companies and academic institutions. In her 20-year career as a mechanical engineering professor, Hubel has experience spanning basic studies of preservation, development of protocols for preservation and education and training.

Hubel also has an entrepreneurial side, founding her own startup, Mesoflow Inc., and serves as deputy director for skills development for MN-REACH, the NIH-funded research hub established at the U. Its mission is to distribute grants for health care technologies that both address unmet medical needs and are within “a few actionable steps” of commercialization.