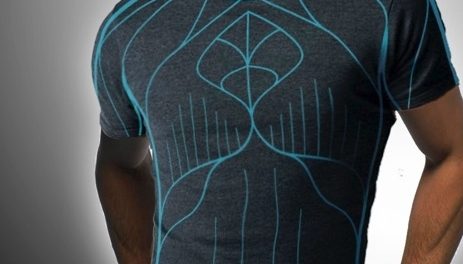 With MIT researchers designing a moisture-responsive fabric made from live cells and a world-renown company like Polo incorporating heart rate monitors into their high-tech shirts, fitness apparel is on the verge of a major revolution. Joining the party is San Francisco-based Atacama – properly named after the Desert in Northern Chile – is also making some noise in the sportswear industry and has engineered its own version of moisture wicking fabric. To say that the technology is impressive would be an understatement.

With a mission to keep runners, cyclist, and triathletes cool and dry during high-intensity workouts in the most grueling conditions, Atacama created “the world’s first biometric channeling system”. Using a process called microfluidics, the study of how “liquids move when constrained on a microscopic level,” Atacama was able to create a fabric that uses “nature’s way of controlling moisture.” Atacama’s innovative textiles are able to not only collect sweat as it’s being formed but they are also capable of channeling it by way of tiny three-dimensional passageways.

We’ve all seen the soaking wet runner barreling down the street dedicated to their workout regimen even on the hottest days. Their biggest challenge outside of their clothes sticking to them during their workout: staying cool and proper hydration. Imagine if that same runner was wearing athletic wear that never ended up saturated no matter the humidity, endurance level, or the amount one happens to sweat. This would mean less chance of overheating, less need to rehydrate, more energy, a boost in comfort levels – all resulting in longer workouts and increased athletic performance. We won’t go into chaffing, rashes, and fungus.

Atacama is onto something and they’re focused on becoming “the new standard in moisture-controlled apparel.” Like all great technological advances, if it somehow mirrors how our body naturally reacts, it’s usually a pretty great discovery. Backed by years of research in advanced microfluidics, Atacama says that its sports apparel’s “stays 12x’s drier than competing materials and 3x’s lighter after high-intensity workouts.” Whether it’s more breathable fabric, always dry workout gear, or simply the benefits of not having your garments stick to your skin while running, Atacama’s moisture-wicking fabric is on schedule to disrupt the way we all work out.

Even though Atacama’s moisture-channeling system target athletic apparel, there seems to be interest from industries outside of the fitness world. Susan Neal, the company CEO, recently told TechCrunch, “We’ve been asked to look at car seats,” she says. “What we’re finding is that there is a lot of interest in this technology to keep moisture and spilled drinks away from electronics in autonomous cars.”

It’s tough to imagine a more suitable application than athlete apparel but Atacama’s technology may end up having a widespread impact. Whether it’s military uniforms, scrubs in hospitals, car seats, or sports team uniforms, we’re going to see a lot more of Atacama’s new technical fabric. And hopefully a lot less of the gym member with soaking wet clothes.