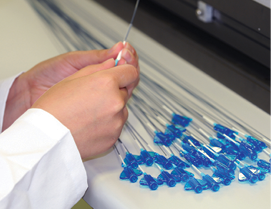 For many medical device manufacturers, proprietary coatings and surface treatments can play a significant role in product development and upgrading legacy medical devices under 510(k) guidelines.

Silicon dioxide, or silica, is one of the most fundamental elements on earth. Most commonly found in nature as quartz, it is the major constituent of sand and a primary component in silicone and glass. Now, this basic chemical compound is being applied using plasma-enhanced chemical vapor deposition (PECVD) techniques as an anti-microbial barrier, a primer to promote adhesion between stainless steel and proprietary coatings, or to create hydrophobic or hydrophilic surfaces.

For many medical device manufacturers, proprietary coatings and surface treatments can play a significant role in product development and upgrading legacy medical devices under 510(k) guidelines. As a result, the medical device industry is aggressively investigating and applying plasma-applied coatings to products such as stainless steel guide wires, catheters, stents, and vascular surgical tools.

“We are always looking for unique and novel ways to make our products more robust and become the market leader, but to do that we need to bring more technology to our devices. Often, that is going to involve some form of coating to functionalize the surface,” explains Aaron Baldwin R&D project group leaders at MicroVention, a company that offers neuro-interventional products including access products, intraluminal stents, occlusion balloons, and polymer coils.

“PECVD can take a product to the next level by addressing surface reaction issues such as biocompatibility or lubricity. It is a unique and eloquent way to deposit and enhance coatings because it allows you to tailor the surface while retaining the bulk material’s properties you need.”

The PECVD process deposits thin films from a gas state (vapor) to a solid state on a substrate. PECVD deposition of silicon dioxide often requires organic silicons are as the feedstock. Within this family, the best known are hexamethyldisiloxane (HMDSO) and tetramethyldisiloxane (TMDSO).

HMDSO is an affordable, flexible reagent that is commercially available in a high purity, liquid form. The volatile, colorless liquid can be plasma-polymerized to create a variety of surface coatings that are safe for medical use. Depending on the composition of oxygen to HMDSO, the property of the surface can be hydrophobic or hydrophilic.

This flexibility makes HMDSO and other siloxanes the ideal choice for PECVD. By adjusting the parameters and other gasses added, chemists can tightly control the material to address a wide range of applications.

For the medical device industry, organic silicon use falls into the primary categories of protective barriers (antimicrobial, antifungal, anti-corrosion), as a primer between stainless steel and exotic metals and proprietary surface coatings, or to modify the surface to become hydrophobic or hydrophilic.

Adhering coatings to surfaces can be difficult with metallic substrates such as stainless steel or exotic alloys. Hexamethyldisiloxane (HMDSO) can be used as an intermediate layer to improve the adhesion between a coating and substrate.

For example, stainless steel guide wires are often coated to make them more lubricious to ease insertion. By applying a thin layer of silicon dioxide, the lubricious coating grafts nicely to a stainless surface.

Organic silicons also can be applied as a linking chemistry between other difficult-to-adhere-to surfaces such as ceramics and Polytetrafluoroethylene (PTFE Teflon). Drug delivery devices that use ceramic nozzles with micron-sized openings are coated with PTFE to prevent clogging. Depositing a 100nm to 150nm layer of HMDSO promotes the bond between the two substances.

To protect electronics, HMDSO coatings are applied in a relatively thick coating of a micron or more. HDMSO is water and gas repellent – properties required to prevent corrosion. A thin layer (~100nm) of PTFE can also be applied if the HMDSO will be exposed to harsh chemical acids or bases.

For vascular surgical tools and instruments that become fouled with tissue debris or blood, coatings can keep a surgeon’s tool cleaner, longer.

Applying a hydrophobic (water-repellent) coating on surgical devices creates a surface that blood and tissue sheets off easily, giving the surgeon better visibility.

At the other end of the spectrum are hydrophilic (affinity to water) devices. Depending on what is required, organic silicons can be used to create such surfaces with either polar or dispersive surface energy.

There are many strategies to achieve an anti- microbial surface including cell harpoons, amphipathic surfaces, antiseptics bound to the surface, and non-stick coatings.

In a unique application, chemical vapor deposition is being used to embed nanosilver particles in a thin layer of organic silicon to prevent microbial adhesion and protect against corrosion. Silver ions can be embedded in a thin layer of silicon dioxide to kill any bacteria present.

Because MicroVention already had an established relationship with PVA TePla – several of its plasma chambers were already being used to aide in coating adhesion – Baldwin began consulting with them on a project to determine the benefits of coatings for stents.

Plasma equipment manufacturers fall into two categories, Baldwin says, those that produce commodity, off-the-shelf products and those that design and engineer systems to fit the needs of a specific application and/or to resolve unique surface energy challenges. So, when companies present PVA TePla with a challenging surface chemistry problem they are encouraged to visit the lab in Corona, California, giving them an opportunity to brainstorm with their technical team and run experiments together.

Many of the best experimental matrices and ideas are produced during these technical customer/supplier meetings. In addition to designing and manufacturing plasma systems, the company also serves as a contract manufacturer and has in-house equipment needed to run parts and conduct experiments with full customer involvement.

“When we start on something new, instead of poking around in the dark, it is better to get expertise involved and [PVA TePla] is very willing to do experimentations – often free of charge – to get the project moving and improve the characteristics of the system and chemistries involved,” Baldwin says. “We were able to go there and work on their plasma machines to determine our parameters and evaluate the equipment.”

Every PVA TePla system is designed to meet the application requirements, which can include unique fixtures, unique electrodes, and chamber modification to accommodate throughput and coating uniformity.

The ability to thoroughly clean the chamber after each application of organic silicons is a major consideration as it coats the entire interior of the chamber (including the electrodes) in addition to the products receiving the coating. As a result, PVA TePla modifies the chamber to make it easier for the user to clean it after every coating application.