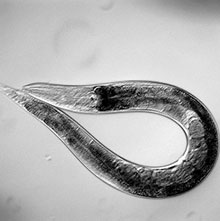 Researchers identified a sensor that detects the Earth’s magnetic field in nerve cells of tiny worms. The ability of animals to detect magnetic fields may be more widespread than previously thought.

Birds and bees do it. So do sea turtles and salmon. Even some bacteria do it. They all can use the Earth’s magnetic field to navigate. While scientists have known for years that many organisms sense magnetic fields (magnetosensation), exactly how has remained a mystery.

A team led by Dr. Jon Pierce-Shimomura at the University of Texas at Austin turned to tiny, 1 mm long roundworms that normally live in soil. The worms, known as Caenorhabditis elegans, are commonly used in research because they are easy to genetically manipulate. All their cells have been identified, and individual cells, including neurons, can be studied in living animals since they’re transparent.

The group, funded in part by NIH’s National Institute of Neurological Disorders and Stroke (NINDS), has been using the worms to study disorders related to the nervous system, including Alzheimer’s disease and Down syndrome. They’ve also been examining the worms’ movement patterns to learn more about neuromuscular disorders, such as Parkinson’s disease. Their latest study appeared online on June 17, 2015, in eLife.

The scientists placed worms in vertically oriented tubes filled with a gel-like substance. When light and electric fields were blocked, starved worms burrowed down, while well-fed worms migrated up.

Many animals can distinguish down from up by sensing the Earth’s gravitational field. Thus, the group designed a system to produce magnetic fields similar in strength to the Earth’s fields (about 0.25–0.65 gauss, which is 25–65 microtesla), while eliminating gravitational, electrical, and other factors. They found that starved worms exposed to a magnetic field that was oriented opposite to the local Earth’s magnetic field reversed their burrowing behavior; they migrated up, suggesting they sensed magnetic fields.

The worms used in the first experiments originated from England. The group repeated the experiments with worms from Australia, where the Earth’s magnetic field is similar in strength and angle but the polarity is opposite. Fed and starved Australian worms migrated in opposite directions than worms from England. Thus, the Australian worms also migrated up if fed and down if starved relative to their native location.

The researchers next examined worms obtained from 10 locations across the planet. They found that worms migrated at angles consistent with vertical movement in their native soil. This directional migration may help guide the worms to food sources.

To determine how worms sense magnetic fields, the scientists tested genetically altered worms. They found that those with deficiencies in pathways that sense touch, light, taste, and oxygen could still detect magnetic fields. However, worms with a defect in a neuron pair called AFD couldn’t orient to magnetic fields. A specific type of protein in the AFD neurons, known as a TAX-4 cyclic nucleotide-gated ion channel, was required for magnetic orientation and vertical migration. AFD neurons also sense temperature, carbon dioxide, and moisture gradients.

The researchers believe that the ability of animals to sense Earth’s magnetic fields may be widespread. “Chances are that the same molecules will be used by cuter animals like butterflies and birds,” Pierce-Shimomura says. “This gives us a first foothold in understanding magnetosensation in other animals.”