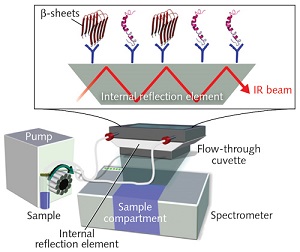 A simple, label-free diagnostic test that uses infrared (IR) light aims for Alzheimer’s disease detection more than 15 years before clinical symptoms appear. The work is promising for drug research because it may ease development of earlier stage treatments, and yield atomic-level information of drug effects.

By the time Alzheimer’s symptoms appear, irreversible brain damage has occurred and symptomatic treatment is the only option. But evidence suggests that neuropathology starts up to two decades before these symptoms arise. Early treatment requires tools to detect Alzheimer’s “in its pre-dementia stages,” according to Prof. Dr. Klaus Gerwert, Head of the Department of Biophysics at Ruhr-Universität Bochum and one of the researchers responsible for the new test. “By applying such drugs at an early stage, we could prevent dementia, or at the very least delay its onset,” adds collaborator Prof Dr. med. Jens Wiltfang, Head of the Department for Psychiatry and Psychotherapy at the University of Göttingen and Clinical Research Coordinator at the German Center for Neurogenerative Diseases (DZNE).

Research into biomarkers for Alzheimer’s has concluded that misfolding and aggregation of amyloid-beta (Aβ) peptides is associated with the disease. Some studies have shown that Aβ peptide aggregates are rich in β-sheets, while others have noted the presence of individual oligomeric Aβ species in cerebrospinal fluid (CSF) and blood. In any case, it is clear that the secondary structure distribution of all Aβ peptides provides a better marker for Alzheimer’s than a single Aβ misfold or the concentration of a specific oligomer.

Current tools for early-stage diagnosis are limited. Although enzyme-linked immunosorbent assay-based tests can analyze Aβ peptide, they cannot provide information on the diagnostically relevant distribution of all secondary structures at once. As part of the PhD projects of Andreas Nabers and Jonas Schartner, the researchers developed an IR sensor1based on a method for attaching proteins to the surface of germanium (Ge) crystals,2 enabling time-resolved atomic-resolution tracking of molecular interactions using spectroscopy.3 The system includes a conventional Fourier transform infrared (FTIR) spectrometer, an external source providing light at 2.5-25 μm, a liquid nitrogen-cooled MCT detector, and a vertical variable-angle attenuated total reflectance setup with a flow-through cuvette (see figure). The cuvette’s trapezoidal Ge crystal serves as an internal reflection element, wherein the IR beam is reflected multiple times and attenuated by interaction with the sample. The sample is peristaltically pumped through the cuvette at a constant rate of 1 ml/min. The sensor’s surface is coated with antibodies that extract the biomarkers from CSF and blood. It can monitor secondary structure distribution of all Aβ species and conformational isoforms, consisting of α-helixes and β-sheets, extracted from body fluids. The approach “is the only robust label-free test with a single threshold-based readout,” says Nabers.

The researchers tested the system on samples from 141 patients segmented into those diagnosed with Alzheimer’s, those with mild cognitive impairment (MCI) because of probable Alzheimer’s, and controls. Results suggest that even in pre-dementia stages, an increased concentration of misfolded Aβ peptides can be detected in body fluids. The system proved able to detect the amide I band frequency of Aβ peptides, revealing an increase of biomarkers as spectral shift. Study participants with a clinical diagnosis of Alzheimer’s exhibited a lower average amide I band position as compared to the control group: whereas the control group had a median value of 1646 cm-1, a downshift to 1641 cm-1 median value indicated increased β-sheet (Alzheimer’s). Additionally, a preliminary proof-of-concept study indicated an amide I band shift below the marker band in patients with MCI. Amide I frequency-based discrimination correlated well with clinical diagnoses, though CSF provided a more accurate sample (90%) than the more accessible blood (84%). The team notes, however, that because the sensor was constructed to fit into standard research spectrometers, increased sensitivity may be possible in setups using, for instance, quantum-cascade lasers as a thermal source.

The researchers hope their work will someday enable Alzheimer’s diagnosis in preclinical stages. To show statistical significance, they are conducting sample analyses from 800 study participants.