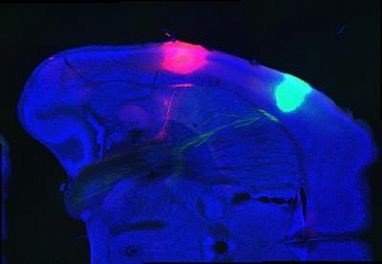 People and other mammals rely on taste to guide food choices. For example, we’re attracted to sweet foods, which are usually rich in energy. A bitter taste, on the other hand, may be a warning sign of potentially harmful chemicals.

Over the past 17 years, the laboratories of Dr. Nicholas Ryba of NIH’s National Institute of Dental and Craniofacial Research (NIDCR) and Dr. Charles Zuker from the Howard Hughes Medical Institute at Columbia University Medical Center have identified the receptor cells in the tongue that detect sweet, sour, bitter, umami (savory), and salt tastes. Information from these cells is relayed to the primary gustatory cortex, or taste cortex, in the brain.

Studies have found that sweet and bitter tastes are represented in distinct areas, or “fields,” of the gustatory cortex. In their latest study, Ryba and Zuker’s teams explored whether activating these fields in mice could evoke tastes even in the absence of an actual bitter or sweet compound. The work was partly funded by NIDCR and NIH’s National Institute on Drug Abuse (NIDA). Results were published in Nature on November 26, 2015.

The researchers selectively activated the sweet or bitter cortical fields using a technique called optogenetics. They first injected a harmless virus carrying the gene for a light-sensitive protein into either the sweet field or the bitter field. Neurons that take up this gene and produce the protein can be activated by light. The scientists then implanted customized optical fibers near the injection sites.

In an initial set of experiments, mice were given a choice between 2 chambers. When one chamber was coupled with stimulation of the sweet cortical field area in the brain, mice developed a preference for that chamber. In contrast, animals whose bitter cortical field was activated when they went into a chamber quickly learned to avoid it.

Thirsty mice whose bitter cortical fields were stimulated when they drank plain water rejected the water. Some even gagged and tried to clean their mouths of a bitter substance that didn’t exist. In contrast, mice who weren’t thirsty aggressively licked plain water when their sweet cortical fields were stimulated during licking. In other experiments, the researchers showed that stimulation of the sweet cortical field could cause mice to prefer a bitter compound. Conversely, stimulation of the bitter cortical field triggered aversion to a sweet compound.

Even in animals that had never experienced sweet or bitter taste, activation of these cortical fields still triggered the corresponding behaviors, showing that the sense of taste is hardwired in the brain.

Further experiments confirmed the essential roles of these cortical fields in sweet and bitter taste recognition. “Taste, the way you and I think of it, is ultimately in the brain,” Zuker says. “Dedicated taste receptors in the tongue detect sweet or bitter and so on, but it’s the brain that affords meaning to these chemicals.”