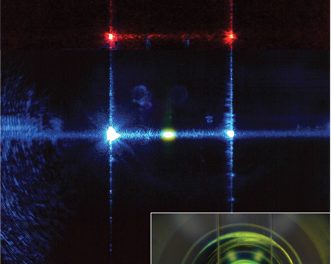 FIGURE 1. This composite microscope image shows a 488 nm laser beam (center) and a 640 nm laser beam (top) focused from the side into a flowcell channel (vertical channel walls visible because of scattered light). A flowing sample of 3 μm fluorescent beads lights up in the 488 nm beam (bright oval in the center). The fluorescence light collection path (inset; concentric circles) is aligned behind the flowcell under LED illumination

Flow cytometry enables the measurement of a set of parameters on vast numbers of cells in a sample—cell by single cell. Most instruments funnel into a narrow stream a liquid suspension of cells, often stained with fluorescent dyes, so that they pass in single file through one or more interrogating laser beams at rates of thousands of cells per second (see Fig. 1). The resulting scattered and fluorescent light allows the cells in the sample to be counted and characterized.

Cell sorters are flow cytometers that provide an additional capability. Once cell populations are identified using scatter and fluorescence parameters, the fluid stream is broken up into droplets, with each cell contained in a separate droplet. The droplets are charged depending on the type of cell they contain, and electrostatic plates gently steer the charged droplets into collection tubes or to waste, so that the sorted cells can be used in additional experiments.

Flow cytometers made one of their first major contributions to biomedicine starting in the 1980s during the global fight against HIV/AIDS. As the epidemic worsened, there was a critical need for a diagnostic tool to help assess whether a person was getting sick from the virus, and how sick they were.

The HIV virus attacks a subset of white blood cells called T-helper cells that express an antigen (protein) called CD4 on their surface. The HIV virus kills these T-helper cells, which are important components in the fight against infection.

In flow cytometry, cells can be distinguished based on the antigens they present on their surface. This is done by introducing biochemical labels that couple an antibody (complementary to the desired antigen) with a fluorescent molecule. Those antibodies are selected for their ability to bind only to their complementary antigens, and the fluorescent tags they carry light up when interrogated by a laser beam.

Also in the field of medical diagnostics, flow-based technology is central to hematology. Hematology analyzers can generate a complete blood count (CBC), which includes the concentrations of red blood cells (RBCs), white blood cells (WBCs), and platelets, in less than a minute per sample.

By analyzing the differences in scatter patterns from individual cells into several angular collection ranges-mainly in the forward direction and at 90˚ to the side-hematology analyzers can measure the size of each cell (platelets 2–4 μm, RBCs 5–7 μm, and WBCs 7–15 μm), whether or not the cell has a nucleus (platelets and mature RBCs don’t, WBCs do), and the shape of the nucleus (round or lobed). This information is then used to classify and count the measured cells. With hundreds of millions of tests performed each year, CBC is by far the most commonly ordered diagnostic test worldwide.

Until recently, traditional flow instruments, because of their cost, size, and complexity, were almost exclusively located in centralized facilities and shared among users across departments or an entire institution. For example, the BD Biosciences (San Jose, CA) LSR II system weighs 525 lbs, not including the fluid-handling cart, and takes up about 15 sq. ft. of bench space.

Most commercial units retail for between $100,000 and $500,000, excluding maintenance and operating expenses, and typically require dedicated, highly trained experts running samples on behalf of users. These factors have limited the number and type of experiments that the average researcher could perform.

Over the last decade, flow cytometers have become smaller, more portable, reliable, cheaper, and easier to use, while retaining and often expanding their capabilities to keep up with scientific demands. The trend ticked up in 2008 with the introduction of the two-laser, six-detector C6 by Accuri Cytometers (later acquired by BD Biosciences), an instrument requiring no user re-alignment. More recently, startup Xitogen, acquired by Beckman Coulter (Brea, CA) in 2014, produced the compact three-laser, 15-parameter CytoFLEX—regarded as best in class in terms of fluorescence sensitivity.1 And in 2014, startup ACEA Biosciences (San Diego, CA) introduced NovoCyte, a compact analyzer that uses time-division multiplexing to share individual detectors among multiple fluorescence channels.

Smaller size and simplicity are coming to cell sorters as well, which traditionally have been large and complex to operate, for emerging clinical applications such as therapeutic stem cell collection. The Bio-Rad (Hercules, CA) S3e houses the entire system (a two-laser, four-fluorescence-channel sorter) within a box that measures 2.5 ft. in height, width, and depth—a size that allows the S3e to fit inside a biosafety cabinet.

Even more compact microfluidic chip-based sorters such as On-Chip Biotechnologies’ (Tokyo, Japan) FISHMAN-R and Miltenyi Biotec’s (Bergisch Gladbach, Germany) Tyto have started entering the market. Formerly built around bulky, power-hungry gas lasers, flow cytometer miniaturization continues. With many solid-state lasers now fitting comfortably in a shirt pocket, system designers are freed up from past constraints and can pack a lot of optical punch in a very small footprint.

Size reduction of detectors is also playing a role, with the latest photomultiplier tubes 1/10th their historical size, and even smaller silicon-based detector alternatives starting to gain acceptance and market share (see Fig. 2).

Immunology, the study of the immune system, involves identifying and characterizing a bewildering diversity of cells (mostly subtypes of WBCs) that help the body fight infection and disease. As understanding of the complexity of the immune system grows, better multiplexing (measuring multiple cell parameters simultaneously) is required.

In contrast to the CD4 assay used to monitor AIDS therapy, multiple lasers are used for many immunology applications, with each laser exciting several fluorescent labels in different spectral bands simultaneously (each label used for a distinct cellular feature such as a different antigen). As more parameters are analyzed, the cell populations in a sample are better defined.

However, current multiplexing approaches have hit a brick wall of sorts. Because the typical emission spectrum of a fluor is about 30-50 nm wide and has a long tail, cramming more than about 3 or 4 common fluors in the available spectrum results in severe overlap between the acceptance band of one channel and the tails of emissions intended for neighboring channels (see Fig. 3). The workaround for this spectral spillover problem, called compensation, is time-consuming and fluor-dependent, and has to be repeated for every new assay protocol, discouraging experimentation and negatively impacting instrument sensitivity and dynamic range.

FIGURE 3. Illustrating the fluorophore spillover problem, the emissions of seven popular violet-excitable dyes (color curves) are shown on the portion of the spectrum most accessible to conventional flow cytometers (around 400-800 nm). The black curve shows the transmission spectrum of a bandpass filter designed to capture light from the center fluorophore (yellow). The long emission tails of neighboring dyes (blue, green, orange curves) contaminate this measurement and cause compensation headaches. The data is modeled with Semrock SearchLight software.

The additional lasers and detection channels also increase the cost and complexity of the instrument. For all these reasons, traditional flow cytometers, such as the BD LSRFortessa X-20 (that supports up to five lasers at 355, 405, 488, 561, and 640 nm), max out at about 20 parameters.

Other directions are being explored to break this logjam. At Kinetic River, we are developing a new technology for multiplexing (the “Arno” technology) that preserves the same workflows of conventional flow cytometry—including the option to sort—but with an expanded array of available detection channels, and where the need for compensation is reduced or eliminated. We have proven the concept to be sound, identified multiple advantages to users and manufacturers, and are currently mapping the practical limits of this approach to deliver a very high-channel-count analyzer (30+) with the same footprint and hardware complexity of a mid-range machine.

Some fields of research are demanding performance that pushes detection technology to the limit. Scientists are recognizing that very small, nanometer-sized bioparticles can reveal important information about cancer and other disease states. These tiny particles, collectively called extracellular vesicles (EVs) and including microvesicles (100–1000 nm in size) and exosomes (30–100 nm in size), are shed from cells and circulate in the blood.

Since light signals (both scattering and fluorescence) from particles drop rapidly with particle size, flow instruments designed to detect micron-sized cells have struggled to extend their reach to the measurement of EVs. Most current commercial units hit the sensitivity floor at or above 200 nm, and only a few have pushed it to 100 nm. The detection sensitivity of flow cytometers needs a boost to adequately characterize EVs.

Recently, groups at the Scintillon Institute (La Jolla, CA) and at Xiamen University (Xiamen, Fujian, China) have demonstrated detection of EVs below 100 nm, and of viruses below 50 nm, by making improvements such as more powerful lasers, tighter focusing, and longer integration times.2,3 Work is underway to translate these advances into robust, reliable instruments for research and clinical use.

In many cases, the research needs of core lab users go beyond what is offered on standard commercial instruments. As a response, Kinetic River delivered the customized, modular flow cytometer named Potomac to the Flow Cytometry Core Facility of the Experimental Transplantation and Immunology Branch of the National Cancer Institute (NCI; Rockville, MD).

William Telford, the lab leader, and his organization support cell analysis and sorting for research across the National Institutes of Health. He also conducts research into new assay and detection technologies, experimenting with exotic light sources.

The Potomac has a fiber-coupled, 100 mW, 488 nm laser, two scattering detectors, and five fluorescence channels (see Fig. 4). It also combines laser beams from external sources such as pulsed, supercontinuum, or deep-ultraviolet lasers. With optimized fluidic, excitation, emission collection, and detection technology, the optical capability can be expanded up to seven lasers and 20 detection channels, with flexibility impossible to obtain on fixed systems.

FIGURE 4. The Kinetic River Potomac modular flow cytometer has an architecture designed for open access. This unit, installed at the National Cancer Institute, was customized to work with external lasers.

Our Danube analyzer provides time-domain measurements of fluorescence lifetime in addition to traditional fluorescence intensity. This capability can be used to sensitively probe the intracellular environment, protein interactions, and cellular metabolism.

Flow cytometers and sorters are complex systems that rely on a wide array of supporting disciplines besides photonics: reagents, fluidics, electronics, software, and more. Fluorescent dyes in particular deserve mention.

Developments like quantum dots (semiconductor core-and-shell nanoparticles with size-dependent emission spectra) and tandem dyes (dye pairs where the donor emission is absorbed by the acceptor and reemitted at a longer wavelength) have made it possible to obtain large effective Stokes shifts of 200 nm or more, helping to fill in the usable spectrum and multiplex more effectively. However, limitations of these labels (quantum dots cannot cross the cell membrane and tandem dyes are difficult to manufacture consistently) have prevented the field from maximizing their benefits.

In the last several years a new class of fluorescent labels—polymer dyes—have emerged to deliver superior performance and expand the options available to researchers. Polymer dyes are highly desirable in multiplexing applications, where large emission shifts allow assay designers greater flexibility and where high brightness enables resolution of dimmer populations. These dyes (an example is the Brilliant Violet family) are excitable in the violet and very bright—because of their structure and manufacturing process, their tandem flavors (which can produce effective Stokes shifts of nearly 400 nm) are more consistent than historical alternatives.4