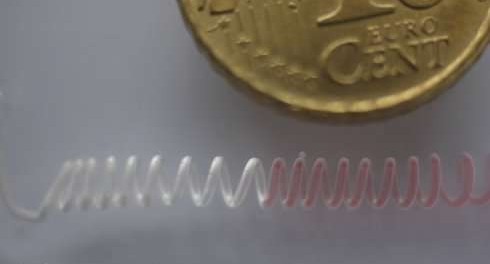 Bionanotechnologists from Wageningen University have developed a new, inexpensive way to make microfluidic devices without using costly materials or cleanroom facilities. The technique, which uses a 3D printer and Lego plastic, is called ESCARGOT. The inventors have demonstrated the principle and its possibilities in a short video. The most important questions about the new technique are answered below.

How does it work?

Briefly summarized, a 3D printer is used to print intricate channels of ABS (Acrylonitrile Butadiene Styrene), a common thermoplastic, which is also used to make Lego bricks. The print is then coated with the transparent rubber PDMS. After this layer hardens, acetone is used to dissolve the printed plastic. Bionanotechnologists Vittorio Saggiomo and Aldrik Velders from Wageningen University wrote an article about this Embedded SCAffold RemovinG Open Technology (ESCARGOT) that has been published in the September issue of Advanced Science.

How did this idea come about?

Researcher Saggiomo has a fascination for building things, writing code and doing 3D printing. “In 3D printing, acetone vapour is used to smooth the ABS. I linked that technique to one of the research lines at our BioNT group, in which we use PDMS rubber to functionalise surfaces. ESCARGOT is so simple and yet so widely applicable and powerful that we have applied for a patent on the method.”

What are the advantages of this technique?

No clean-room is required, the result is suitable for cells and bacteria, and features such as lighting, heating or cooling elements and RF elements can be integrated in the process. Also, it is inexpensive, elastic, transparent, and no moulds are required. The technique offers new possibilities for researchers. Saggiomo looks forward to seeing how other scientists, including physicists and biologists, are going to use the method. “I would also like to use the technique to build an organ-on-a-chip. That could contribute to research into how diseases spread from organ to organ and could be used for testing drugs.”

nd what are most important limitations?

According to Saggiomo, the 3D printer itself is the primary constraint. “At present, 100 micrometres is the thinnest feature we can print, although we hope make this even thinner. Fortunately, 85 percent of the microfluidic devices that are now on the market have a channel size of 100 or 200 microns, which allows us to make these devices.”

The Wageningen researchers are currently trying to improve the method, and are also working on an all-in-one microfluidic box in which the controller and detectors are all built into a simple design, which could be used for applications such as wearable sensors. The bio-nanotechnologists from Wageningen University are continuing to work on supramolecular and nanoparticle-based sensors, which they are combining with their ESCARGOT concept.