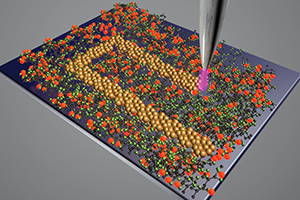 Plasma electrons emerging from a nozzle to form a microelectronic structure that is only as wide as a strand of human hair (Image Credit: SOUVIK GHOSH)

To get a sense of how Christian Zorman and his colleagues aim to create a game-changer in nanotechnology manufacturing, start with the example of a fluorescent bulb. The illumination that appears a moment after you flip the light switch occurs in something called a plasma, the fourth state of matter after solid, liquid and gas. In plasmas, electrons run wild. They separate from the nucleus, where they normally orbit faithfully, and instead move about like stampeding horses. Zorman’s team is corralling these free electrons—albeit from a more powerful source than a light bulb—and using them to write the next chapter in the manufacturing of miniscule products.

The plasma electrons will be used to write patterns on special materials designed by the team to create microelectronic devices—a production process that eventually could be faster, cheaper and less wasteful than current microfabrication technology. It could make possible a new generation of tiny electronics, including wearable computers; portable, plastic-wrap-thin solar panels; and moisture-resistant medical sensors that can endure the wet environment in our bodies.

With the help of a four-year, $1.2 million National Science Foundation Scalable Nanomanufacturing Program grant awarded in 2012, the team is developing a high-volume manufacturing process in which microelectromechanical systems (MEMS) and nanoelectromechanical systems (NEMS) are printed like newspapers run through a printing press. A MEMS device is an electronic sensor or actuator about 50 times smaller than the width of a strand of hair. A NEMS is a tiny electronic machine up to 1,000 times smaller than a MEMS.

Although the process developed by Zorman and colleagues is not the only one competing to take over the MEMS manufacturing market, the main contender, two-dimensional printing, lacks the potential to reach the nanoscale, Zorman said.

“If we’re successful, we’ll be able to mass-produce flexible electronic structures on the nanoscale,” Zorman said. “But we think we can compete head-to-head with two-dimensional printing on a microscale as well.”