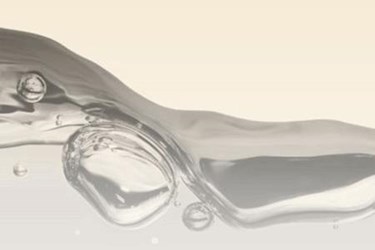 The growing field of microfluidics research involves manipulating and studying small amounts of liquid, often confined to channels (or living vessels) that are typically only tens of microns wide. Although microfluidics is a relatively new scientific research field, applications for it are expanding rapidly.

For example, microfluidics is the key enabling technology for lab-on-a-chip devices used in point-of-care diagnostics and life science research, and it is also enabling development of new fuel cell designs. Advances in microfluidics will also make it possible to replace large laboratory instruments or reactors with small devices that require tiny amounts of chemicals and offer faster analysis or processes.

When working with fluids on such a small scale, effects from capillary forces, surface roughness, and chemical interactions between the liquid and the device play a major role. The time-scale of events also decreases, becoming too fast to analyze with standard cameras. High-speed cameras, therefore, are helping scientists and engineers understand the complexities of micros-scale fluid dynamics.

Typically, microfluidic processes or experiments require camera speeds of 3,000 to 25,000 fps, but some may benefit from speeds over 200,000 fps. Flows often display a specific direction of motion, especially in channels or vessels, and therefore in many situations they may be captured in an elongated aspect ratio image. This aspect ratio conveniently allows for reduced resolutions and increased camera speed with CMOS sensors used in high- speed video cameras.

Figure 1 shows an example of a microfluidics study, in which two different fluids were mixed and the resulting tiny droplets were studied. The image is from a sequence captured at 10,000 fps with a 20 microsecond exposure, using a Phantom Miro LC310 monochrome high-speed camera and Leica microscope.

Quality Images Provide Quality Data
Most researchers want to do more than just record images of fluid dynamics; they also want to extract valuable quantitative data from their images. In addition to using the right optical setup and lighting conditions, choosing the right camera is key for acquiring quality images and, in turn, obtaining quality data out of them.

Since microfluidic images are usually captured using a microscope, a small, lightweight camera is often preferred. That camera must also be fast and light-sensitive, while producing high-quality images with little noise. Due to the small area of interest, supplemental lighting is typically provided exclusively from the bottom of the microscope to illuminate the subject matter. Using a sensitive camera is important for capturing even the darkest details, and a high dynamic range is important to properly distinguish these details. Most high-speed cameras report ISO ratings  between cameras. Although various camera settings can be used to boost sensitivity, the user should be aware that higher sensitivity can come at the expense of dynamic range, image quality, and higher amounts of visible noise. Users should test camera results in their application, if possible. Once an event is captured, many high-speed cameras have post-processing capabilities (in software) to allow users to optimize the image.

Images that exhibit very little noise are also essential to extract accurate data that can then be used to calculate speed or direction, or to see overall patterns.

Camera speed is also critical, because flow dynamics and transient elements, such as vortices, evolve much faster at a microscopic scale than at larger scales. Capturing these fast-changing elements requires a time-resolved approach that acquires images every millisecond or every few microsecond. Observing quickly changing patterns or varying particle velocities necessitates detecting minute changes between each frame.

As a consequence, high-speed imaging of microfluidics generates massive amounts of data — gigabytes or terabytes — in a very short time. This makes imaging workflow, synchronization with additional devices and software, and overall system integration extremely important. A camera that works seamlessly with synchronization and acquisition devices, as well as image analysis software will let the user easily drive the sequence of image and data capture. By working together, camera and software companies can combine state-of-the-art camera technology,  electronics, and top-of-the line image processing in an efficient manner, so scientists don’t have to spend months analyzing the massive amount of resulting data.

The speed of data management in the entire imaging system — microscope or lens, lighting, camera, software, data transfer, and the data storage and processing computer — is important for analysis. Non-volatile memory and ultra-fast storage such as CFast capability are on-camera data storage solutions that save data quickly and protect it. 10G Ethernet support can also make a significant impact to improve the speed of data transfer.

Small-Scale Fluid Analysis
If an application involves vortices or complex movements within a fluid or mix, seeding (adding tiny particles to the fluid or mix to visualize the flow easily, if necessary) combined with specific illumination and high-speed imaging can be used to examine these movements. When used, the size, weight and buoyancy of the particles must be considered, so as to not affect the flow itself. This type of analysis, called particle imaging velocimetry (PIV), looks at how the pattern created by multiple particles in the fluid evolves, and creates a map of the velocities and directions of the flow in the various locations. The advantage of PIV is that it creates the map using imaging instead of intrusive measurements that could affect the experiment.

The very fast flows studied with PIV often require accurate synchronization of supplemental lighting, such as a pulsed, focused LED or LASER, with high-speed image acquisition. A useful high-speed imaging technique, shown in Figure 2 below, is to disable the camera’s electronic shutter while setting the exposure time to the maximum value, which lowers the time between frames, or the “straddle time,” to just a few hundred nanoseconds. The laser fires a short pulse at the end of the initial frame’s exposure and again at the beginning of the second frame’s exposure to measure particle displacement. 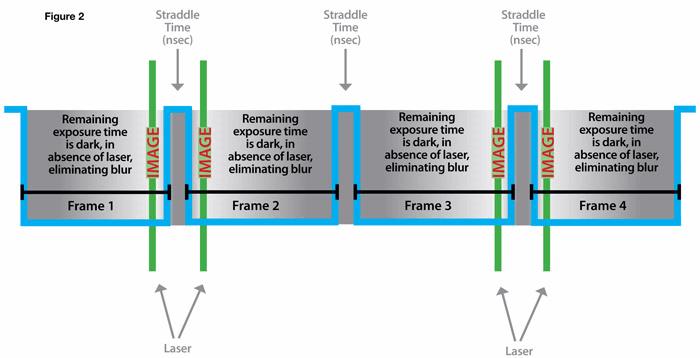 To accommodate this synchronization, some cameras are equipped with specialized synchronization features adapted to such techniques. PIV integrators also provide the synchronization capability as well as advanced algorithms for tracking and measurement. 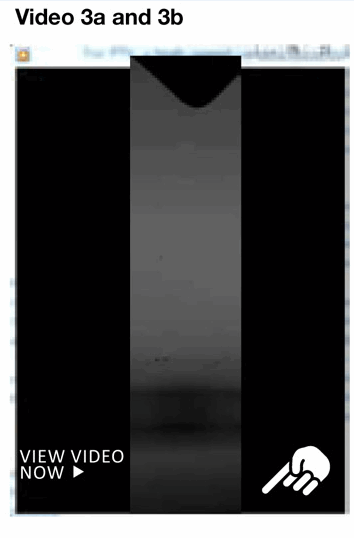 Shadowscopy is a technique that can be used to image droplet formation and fluid behavior, as well as applied to many of the research situations discussed in this article. In the examples shown in Videos 3a and 3b, light was collimated on the region of interest (i.e., a resting drop), with the camera focused on the object. This shadowscopy technique produced images of a grey background with black droplets, highlighting the large perturbation of the fluid density field surrounding the droplet. The shadowscopic setup used in this example is shown in Figure 4.

Here, the light source is a continuous Superlum LED array generating 104 lux luminous incidence at 40 cm after collimation. A sample drop of 0.5 µl is deposited on “flatbed silicone” for surface tension optimization. A macro lens (Canon macro MP-E 65mm f/2.8) is affixed to the high-speed camera (Phantom V1610), with the largest magnification of 5x obtained at a 41 mm working distance. The acquisition rate is 210,000 fps, with a resolution of 512 x 112 pixels. The high luminous flux makes such high frame rates possible because the exposure time is only 1µs. Moreover, this short exposure time accurately freezes the image of the particles under displacement in the region of interest (2.867 x 0.627 mm).

Particle Tracking Velocimetry
To analyze fluid flow and characteristics in microfluidic channels, many scientists are also adapting methods traditionally used at larger scales. One of them, called particle tracking velocimetry (PTV), involves individually tracking the movement of a few particles (as opposed to PIV) in a flow. These could be actual solid particles, droplets, bubbles, or small cells naturally present in the flow, or they could be inserted on purpose (seeding).

For PTV, a high-speed camera mounted to a microscope is typically used to image a microfluidic flow containing the particles. While PIV processes require specialized tracking software, PTV often benefits from automatic tracking and measurement algorithms found in the standard control software of high-speed cameras. Common measurements applied to the images include distance, angle, and linear and angular speed and acceleration.

If required, integrators can offer more sophisticated algorithms to develop 2-D or 3-D trajectory representations that show the direction and velocity of each particle, as well as their evolution over the course of the recording.

Conclusion
With microfluidics’ real-life applications expanding every day, and microfluidics devices appearing in our daily lives, accurate analysis of quickly changing micro-scale fluid dynamics is becoming a strategic challenge for R&D in various fields. Image data is used as the prime source for measurement methods mentioned in this article. Acquiring this data requires a high-speed camera that delivers images with little noise, and integrates easily with image analysis software. With high-quality results, scientists can better understand microscopic-scale fluid dynamics and use that knowledge to develop new and better technologies.  •

Vision Research offers the broadest range of cameras to meet industry needs, including the versatile Phantom Miro family, the v-series, and the high-powered Ultrahigh-speed Series of camera. Phantom Miros are a line of small, rugged, high-speed cameras with 1-, 2-, or 4-megapixel CMOS sensors that can be easily mounted to microscopes for microfluidics analysis. The Phantom Miro Lab Series is designed specifically for laboratory applications where high-speed imaging files are immediately saved to a computer for viewing and analysis. The Phantom UHS-Series provide up to 25 Gpx/second and superb sensitivity, for applications that require the highest performance.

All Phantom cameras include software and hardware compatible with third party integrator equipment, facilitating data fusion from a variety of sources and signals, including signals from probes, micro-currents, and excitation currents. These systems can correlate stimuli between electromagnetic currents with results and provide time-stamped images and typical analog values.