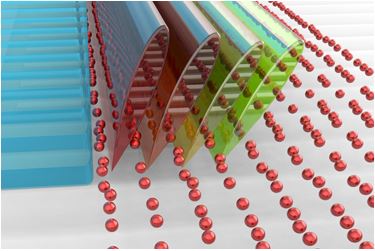 Drug development, artificial tissue design, and the study of intercellular communication are just some of the applications that rely on the precise control of particles or cells in microfluidic devices. By manipulating the fluid motion, researchers can position particles suspended in the fluid into desired patterns. High-frequency sound waves injected into the fluid offer a gentle approach to directing the particles without touching them. However, it is challenging to generate acoustic waves with the accuracy needed to position the particles in specific locations within the maze of microscopic channels. A research team led by Ye Ai of the Singapore University of Technology and Design has figured out how to use the channels themselves as waveguides for shaping the sound waves propagating in the fluid.

The design relies on acoustic waves that travel along the surface of the substrate that underlies the channels. These surface acoustic waves are already used in microfluidic applications, but the patterns they generate in the fluid typically don’t match the channel layout, which reduces the accuracy of particle placement. The researchers found that by directing the acoustic waves to be parallel to the walls of the channel, they could create interference patterns in the fluid that are precisely positioned with respect to the channels. In a series of experiments, the researchers showed that they could switch the location of a stream of fluorescent polystyrene microbeads simply by changing the acoustic frequency. One frequency pushed the beads close to the channel walls, while another moved them to the channel centers.