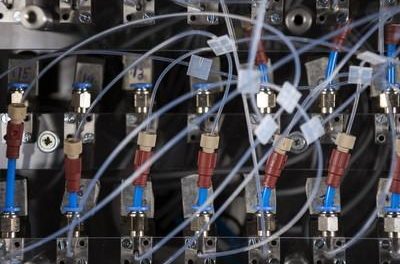 Not in rows of large industrial tanks, nor on shelves laden with test tubes and beakers. The future of chemistry and biology is barely visible to the eye: it’s hundreds and thousands of microdroplets, whizzing through thin tubules of microfluidic devices. The race is on to find technologies that will make it possible to carry out controlled chemical and biological experiments in microdroplets. At the Institute of Physical Chemistry of the Polish Academy of Sciences (IPC PAS) in Warsaw a method of remote, yet rapid and accurate assessment of oxygen consumption by micro-organisms living in individual microdroplets has been demonstrated for the first time.

“Devices for the cultivation of bacteria in microdroplets have the chance to revolutionize work on the development of new antibiotics and the study of mechanisms responsible for the acquisition of drug resistance by bacteria. In one small microfluidic system it is possible to accommodate several hundred or even several thousand microdroplets – and to carry out a different experiment in each of them, for example with different types of microorganisms and at different concentrations of antibiotic in each drop,” describes Prof. Piotr Garstecki (IPC PAS), then explains: “For such studies to be possible, one has to provide the bacteria with conditions for development for even a few weeks. Thus, knowledge about the flow of oxygen to the droplets and the rate of its consumption by the microorganisms becomes extremely important. In our latest system we demonstrate how to read this key information.”

The bioreactors of the future are water droplets with culture medium suspended in a carrier liquid with which they are immiscible (usually this is oil). In the channel of the microfluidic device each droplet is longer than it is wide and it almost completely fills its lumen; sizes matched in this manner ensure that the drops do not swop places in the channel and throughout the duration of the experiment they can be identified without any problems. At the same time, there has to be a thin layer of oil maintained continuously between each microdroplet and the wall of the channel. Without this, the bacteria would be in direct contact with the walls of the channel so they would be able to settle on them and move from drop to drop. Unfortunately, when the microdroplet is stationary, with time it pushes out the oil separating it from the walls, laying it open to contamination. For this reason the drops must be kept in constant motion – even for weeks.

Growing bacteria need culture medium, and waste products need to be removed from their environment at an appropriate rate. Information about the bacterial oxygen consumption in individual droplets is therefore crucial to the operation of microbioreactors.

“It is immediately obvious where the problem lies. In each of the hundreds of moving droplets measurements need to be carried out at a frequency corresponding to the frequency of division of the bacteria or more, in practice at least once every 15 minutes. In addition, the measurement cannot cause any interference in the microdroplets,” says PhD student Michal Horka (IPC PAS), a co-author of the publication in the journal Analytical Chemistry.

Help was at hand for the Warsaw researchers from chemists from the Austrian Institute of Analytical Chemistry and Food Chemistry at the Graz University of Technology. They provided polymer nanoparticles with a phosphorescent dye, which after excitation emit light for longer the higher the concentration of oxygen in the surrounding solution (the nanoparticles underwent tests at the IPC PAS on bacteria in order to determine their possible toxicity – none was found).

Research on monitoring oxygen consumption in the droplets commenced with the preparation of an aqueous solution with the bacteria, the culture medium and a suitable quantity of nanoparticles. The mixture was injected into the microfluidic system constructed of tubing with Teflon connectors with correspondingly shaped channels. The first module formed droplets with a volume of approx. 4 microlitres, which were directed to the incubation tube wound on a spool. In the middle of its length there was another module, with detectors for measuring oxygen and absorbance.

“In the incubation part in one phase of the cycle the droplets flowed in one direction, in the second – in another, electronically controlled by means of suitable solenoid valves. All this looks seemingly simple enough, but in practice one of the biggest challenges was to ensure a smooth transition between the detection module and the tubing, so that bacterial contamination did not occur at the connections,” explains PhD student Horka.

During their passage through the detection module the droplets flowed under an optical sensor which measured the so-called optical density, which is the standard parameter used to evaluate the number of cells (the more bacteria in the droplets, the less light passes through them). In turn, the measurement of the duration of the phosphorescence of the nanoparticles, evaluating the concentration of oxygen in the microdroplets, was carried out using the Piccolo2 optical detector, provided by the Austrian group. This detector, which looks like a big pen drive, was connected directly to the USB port on the control computer. Comparing information from both sensors, IPC PAS researchers showed that the microfluidic device they had constructed made it possible to regularly and quickly monitor the metabolic activity of bacteria in the individual microdroplets.

“We carried out our tests both with bacteria floating in water singly – this is how the common Escherichia coli bacteria behave – as well as with those having a tendency to stick together in clumps – as is the case for tuberculosis bacilli or others belonging to the same family including Mycobacterium smegmatis which we studied. Evaluation of the rate of oxygen consumption by both species of microorganisms proved to be not only possible, but also reliable,” stresses PhD student Artur Ruszczak (IPC PAS).

The results of the research, funded by the European ERC Starting Grant (Polish side) and the Maria Sklodowska-Curie grant (Austrian side) are an important step in the process of building fully functional microfluidic devices for conducting biological experiments lasting many weeks. A system for culturing bacteria in microdroplets was developed at the IPC PAS a few years ago, however it was constructed on a polycarbonate plate. The maximum dimensions of the plate did not exceed 10 cm, which greatly limited the number of droplets; in addition, as a result of interaction with the polycarbonate, after four days the channels were contaminated with bacteria. Devices of Teflon modules and tubing would not have these disadvantages, and would be suitable for practical applications.

About Institute of Physical Chemistry of the Polish Academy of Sciences

The Institute of Physical Chemistry of the Polish Academy of Sciences was established in 1955 as one of the first chemical institutes of the PAS. The Institute’s scientific profile is strongly related to the newest global trends in the development of physical chemistry and chemical physics. Scientific research is conducted in nine scientific departments. CHEMIPAN R&D Laboratories, operating as part of the Institute, implement, produce and commercialise specialist chemicals to be used, in particular, in agriculture and pharmaceutical industry. The Institute publishes approximately 200 original research papers annually.