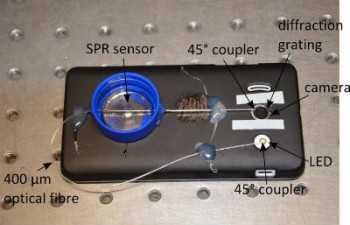 Researchers at the Hanover Centre for Optical Technologies (HOT), University of Hanover, Germany, have developed a self-contained fiber optic sensor for smartphones with the potential for use in a wide variety of biomolecular tests, including those for detecting pregnancy or monitoring diabetes. The readings of the sensor can run through an application on a smartphone which provide real-time results. When properly provisioned, the smartphone-user has the ability to monitor multiple types of body fluids, including: blood, urine, saliva, sweat or breath. In case of medical applications, the sensor readings can be combined with the GPS signal of a smartphone and users can then be guided to the next drug store, hospital or the ambulance.

Described in Optics Express, a journal of The Optical Society, the sensor uses the optical phenomenon of surface plasmon resonance (SPR) — which occurs when light causes electrons on the surface of a thin film to jostle — to detect the composition of a liquid or the presence of particular biomolecules or trace gases.

Surface plasmon resonance occurs when a fixed beam of light strikes a metallic film; most of the light is reflected, but a small band is absorbed by the film’s surface electrons, causing them to resonate. When the metallic film is placed in contact with a fluid, the index of refraction of the liquid changes the absorbed band’s size and location in the light spectrum. By adding recognition elements to the film that cause a shift in the index of refraction when bound to targeted biomolecules or trace gases, scientists can thus determine important information about a biological sample’s composition based on which light is reflected and which is absorbed.

“We have the potential to develop small and robust lab-on-a-chip devices for smartphones. So, surface plasmon resonance sensors could become ubiquitous now,” said Kort Bremer, inventor and co-author of the new paper with Bernhard Roth, director, Hanover Centre for Optical Technologies (HOT), University of Hanover, Germany.

Surface plasmon resonance is a phenomenon commonly used for biosensing, but typically requires bulky lab equipment involving both a light detector and light source. Fortunately, smartphones already have both of these, allowing the minimalist, U-shaped device the researchers designed to consist solely of a 400-micrometer diameter core multimode fiber with a silver-coated sensing region.

In a proof-of-concept version of the sensor, Bremer carefully excised the polymer coating from a 10-millimeter segment of the optics cable to expose the bare 400-micrometer diameter glass fiber core. He then cleaned the segment, subjected it to a silver-coating process, added a small well in which to pour the solutions being observed, and polished both ends of the fiber to 45° angled faces. They were then adhered to the phone’s case and, thus, to its LED and camera, the latter of which was affixed with a diffraction grating to separate the light beam into an emission spectrum.

In subsequent experiments, the device’s sensitivity was tested using various concentrations of glycerol, and the team confirmed it was on par with current equipment, at a fraction of the cost and size.