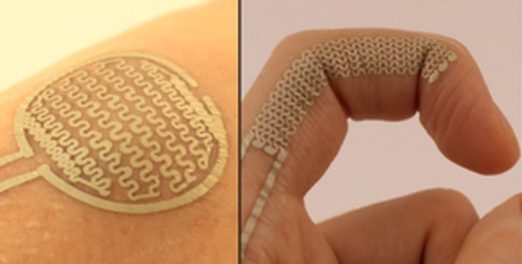 Computer scientists from Saarland University and the US company Google are giving wrinkles, knuckles and birthmarks a whole new meaning. Similarly to temporary tattoos for children, the researchers are placing ultra-thin, electronic tattoos on distinctive body locations. The user can touch, squeeze or pull them, and thereby intuitively control mobile devices such as a music player, or easily make indicators light up. The advantage is that the body locations are so familiar that the individual control elements can be operated even with one’s eyes shut. In addition, they enable a completely new type of interaction, and also allow for a natural way to provide operating instructions.   That the human body represents an excellent touch-sensitive input surface for mobile devices was shown by the Saarbrücken computer scientists as early as 2015. Together with researchers from Carnegie Mellon University in the US, they used flexible silicone and conductive electronic sensors to develop “iSkin”, touch-sensitive stickers for the skin. When attached on the forearm and connected to a smartphone, the sticker could be touched in order to take a call or change the volume of a song being played. However, this process was suitable only for certain body locations, because it required a relatively flat surface. Moreover, the stickers were comparatively large.
“We wanted to focus on body locations where no interaction had been possible before. But placing electronics precisely on the skin, let alone fitting them onto bony structures like the knuckles or microstructures like wrinkles, is very complicated,” explains Martin Weigel, PhD student of Jürgen Steimle, professor of human-computer interaction at Saarland University. But the researchers were also convinced that this would be worthwhile for users. “When you have to press on the first knuckle of your left hand, you know very intuitively where it is. The same goes for the inside of the index finger,” Weigel adds.

Together with Alex Olwal from Google, his colleague Aditya Shekhar Nittala and Professor Jürgen Steimle, Weigel tinkered with the right combinations of conductive inks and printing processes, in order to print the conductive traces and the electrodes as compactly and thinly as possible on the temporary tattoo paper. After several tests the breakthrough finally came. A conductive plastic named PEDOT:PSS was the solution. With this, the researchers could print the tattoo to be thinner than a hair’s breadth, and therefore they could ensure that it would not only fit onto knuckles and wrinkles, but also be so flexible that it could withstand compression and stretching. The researchers named the electronic tattoos SkinMarks. They are applied on the skin with water, and they come back off after a few days. In the laboratory, the scientists need only 30 to 60 minutes to print such a tattoo. “This could even be speeded up. We are convinced that in the future, everyone will be able to make their own e-tattoo in less than a minute on a standard, commercially available printer,” explains Professor Jürgen Steimle. With the prototypes, the researchers also tested new input forms. Each e-tattoo was connected via a conductive copper tape to an Arduino mini-computer placed near the body. In this way, for example, an e-tattoo was attached on the inside of the index finger. If the finger is extended, the wearer could swipe the tattoo with another finger to adjust the volume of a music player. If the finger is bent, then pressing on one of the three segments would stop the current song, or skip to the previous or next one.

During their experiments the researchers identified four classes of suitable orientation points on the body. Among these, they also used accumulations of pigment-forming cells. On a liver spot of a participant, they attached a heart-shaped tattoo. If an electric voltage is applied, it lights up in blue. “Linked to the corresponding smartphone app, it could light up when the loved person is available,” Steimle explains the application, adding: “Touching the heart then begins a call.”
Read more at: http://www.printedelectronicsworld.com/articles/11082/using-distinctive-body-locations-to-control-mobile-devices