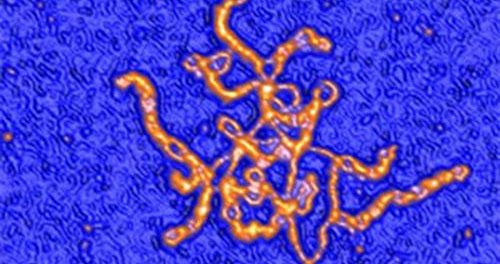 Cancer thrives when mutated cells undergo frequent division. Most anti-cancer drugs work by inserting themselves in between the DNA base pairs that encode our genetic information. This process is known as intercalation, and it can result in subtle changes to the DNA molecule’s geometric shape or tertiary structure. These structural changes interfere with the DNA’s transcription and a cell’s replication process, ultimately resulting in cell death.

While intercalating agents used in chemotherapy drugs are highly effective in fighting cancer, they also may kill important cells in the body and lead to other complications such as heart failure. Therefore, researchers are always searching for faster, cheaper and more accurate tools to aid in the design of next-generation anti-cancer drugs with reduced side effects.

A paper published in ACS Nano, one of the top nanotechnology journals in the world, explores this topic. “Modeling and Analysis of Intercalant Effects on Circular DNA Conformation,” focuses on the effect of the intercalating agent ethidium bromide (a mimic for many chemotherapy drugs) on the tertiary structure of DNA.

“The second dogma of biology states that structure determines function. Any structural change may be translated into a change of function,” says Fologea. “So we devised a simple method to allow us to ‘see’ how an intercalating agent is changing the shape of DNA at the single molecule level.”

To achieve this, the team created a nanopore — a nanoscale sized opening in an ultrathin membrane — through which a single DNA molecule can pass when an electric field is applied to the microfluidics containing the device. When the DNA goes through this nanoscale aperture, it generates an electrical signal that provides information about its physical properties such as its shape, elasticity and even interactions with other biomolecules.

“Our measurements revealed unique current blockades correlated to branched structures in the DNA molecule that resulted from ethidium bromide intercalation,” says lead author Eric Krueger, who was a postdoctoral researcher working jointly in Estrada and Fologea’s laboratories. “These results show that nanopores can be a scalable, efficient and cost effective way to measure DNA interactions with emerging anti-cancer drugs.”

The team involved collaborations with the University of Illinois at Chicago and the University of Illinois at Urbana-Champaign. Using a combination of nanofabrication techniques, nanopore electrical measurements, atomic force microscopy imaging and all-atom simulations carried out on XSEDE supercomputer resources, the team’s interdisciplinary approach has extended the practical use of solid-state nanopores to a new area of cancer research. XSEDE (Extreme Science and Engineering Discovery Environment) provides researchers with access to several advanced computing resources across the country.

“The new simulation capabilities developed by Dr. Khalili-Araghi’s group at the University of Illinois at Chicago have opened up a new computational space for the rapid screening of intercalating molecules as potential cancer therapies,” says Estrada. “We are now working on coupling such simulations with atomically thin materials, such as graphene and two-dimensional molybdenum disulfide, in order to increase the sensitivity of our approach.”

This project highlights the capabilities of two of Boise State University’s newest Ph.D. programs, in biomolecular sciences and materials science and engineering, that have helped the university become designated as a doctoral research university by the Carnegie Classification of Institutions of Higher Education, the nation’s premier college classification system. The research was supported by the Division of Research and Economic Development and the Biomolecular Research Center at Boise State University.