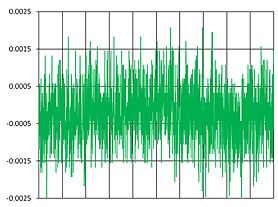 The TechNote describes in detail the important factors in the interpretation of displacement resolution specifications found in most sensor datasheets – an often misinterpreted number.

As a machine designer or engineer, you must continually specify sensors for use in your designs. During your search, you are confronted by an array of product specifications you must rely upon to select the sensor with the right cost-performance ratio. Unfortunately, not all displacement sensor specifications are presented in a way that allows direct comparison. Resolution is one of the most frequently misunderstood and poorly defined descriptions of performance.

Resolution is an important specification because without sufficient resolution you may not be able to reliably make the needed measurement, and an over performing sensor will burden your budget. Resolution is only meaningful within the context of the system bandwidth, the application, and the measurement method and unit of measure used by the sensor manufacturer. A simple “resolution spec” in a datasheet rarely provides enough information for a fully informed sensor selection. Understanding this important specification will empower you to more confidently make the right displacement sensor choice.

Sensor Resolution Is Not About “Bits”

Resolution is also not accuracy. An inaccurate sensor could have high resolution, and a low resolution sensor may be accurate in some applications.

The Static specification only applies when the sensor output is low-pass filtered for low bandwidth, sometimes as low as 1-10Hz. This is only useful if you will be using the sensor with an equivalent bandwidth filter to measure slow moving systems. The Dynamic specification is usually for an unfiltered sensor; this is the resolution you can expect when using the sensor at full bandwidth in high-speed dynamic applications. If the data sheet uses Static and Dynamic terms, search for a note that defines exactly what frequencies are represented by Static and Dynamic. Until you have actual frequencies, you will not know if the sensor is a good choice for your application. Lion Precision lists resolution at specific bandwidths, removing any guess work.

Where is the Filter for Low Bandwidth Resolution?

When sensor resolution is reported for lower bandwidths, it is critical that you know if the device actually has such a filter. If the bandwidth filter is integral to the sensor, you can be confident that you will achieve the specified resolution. If the manufacturer used an external filter to generate the specification or simply calculated a number, you must know all the parameters of the filter, not just the cutoff frequency. Lion Precision sensors include integral bandwidth filters assuring that actual performance will match the specifications.

The distinction between RMS (root mean square) and Peak-to-Peak (sometimes called by the equivalent name Peak-to-Valley) is critically important to understanding the absolute sensor performance. Analog methods of measuring these values include special meters and visual interpretation of an oscilloscope display. In the digitized world, these values are calculated by capturing a large number of samples of the output voltage and analyzing the data statistically.
RMS measurements of dynamic electrical signals indicate the equivalent power from a DC source. It is similar to, but not the same as, an average value. RMS values may be determined by analog meters which measure the signal power and equating it to a DC voltage that would produce the same power. When digitized and analyzed statistically, the RMS value is equal to the standard deviation of the captured samples. RMS is the most relevant specification when measuring broadband vibration.

Peak-to-Peak (P-P) is the difference between the maximum and minimum peaks of the noise over some period of time. If the samples create a perfectly normal (Gaussian) distribution, the P-P value can be estimated as six times the standard deviation, but in practice, this is rarely the case. Noise signals are rarely so well behaved and usually contain spurious peaks that create an actual P-P value much higher than six times the standard deviation. This means that resolution values specified by their P-P range must be at least six times greater than RMS values and are usually considerably higher than that. The 2.4mV P-P value in Figure 3 translates to 0.29mV RMS; the P-P value is more than eight times higher than the RMS value in this case.

The P-P value is the most appropriate specification if you are trying to continuously determine the instantaneous position of your target.At any moment in time, the sensor output can vary by an amount equal to the P-P resolution specification; therefore, your position measurement can vary by that same amount.

Because RMS resolution specifications are always significantly lower than P-P, most datasheets will list resolution as an RMS value. If you are measuring continuous instantaneous position, you will need to know the P-P resolution. The datasheet may list both RMS and P-P values, or a multiplier for converting the RMS value to P-P. If no P-P value or multiplier is listed, you will have to contact the manufacturer; in the meantime,you can assume that the P-P value is at least six times higher and usually closer to ten times higher.