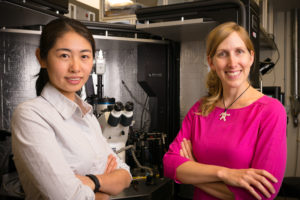 A handshake between light and molecules may soon lead to purer chemicals, thanks to the work of Jennifer Dionne, PhD, associate professor of materials science and engineering, and her lab. As described in a paper published this week in Nature Nanomaterials, these researchers are in the midst of developing an optical light filter that can sort between highly similar molecules, called chiral molecules.

Chiral molecules are molecules with an asymmetrical shape – often compared to our hands because they are mirror images of each other and aren’t interchangeable. Even when we know which handedness of a molecule we want to synthesize, we often can’t help but make both the left and right versions and, once they’re made, it’s extremely difficult to sort out these mirror twins. As Dionne explained to Stanford News, this amounts to a pervasive problem:

Approximately 50 percent of drugs and 30 percent of agrichemicals are chiral, which means they can be left- or right-handed. Of those, more than 90 percent are sold as mixtures of both handed molecules because it’s so hard to separate them.

In some cases, the seemingly subtle differences between chiral molecules can be dangerous. Perhaps the most infamous example a chiral molecule is the case of Thalidomide, a drug that was manufactured in the 1950s in Germany, which could either treat morning nausea or induce birth defects, depending on the handedness of the molecule.

The Dionne lab believe their expertise in nano and optical materials could help solve the problem of chiral molecules but a significant hurdle is that optical light doesn’t interact very strongly with molecules, due to their small size. To address this, Yang Zhao, PhD, a postdoctoral fellow in the lab, created special metal nanostructure that shrinks circularly polarized light down, while also strengthening the interaction between the light and the target molecules. Like a handshake, this light will interact with molecules that complement its shape and pull them down, allowing the researchers to filter out the remaining molecules.

Although the researchers haven’t tested this optical filter on molecules yet, they did measure the optical forces produced by their prototype. They combined highly focused beams of light, known as optical tweezers, and an atomic force microscope fitted with a chiral tip – which acted as both a stand-in for a chiral specimen and mapped the forces specific to the handedness of that tip – and they found that the forces should be strong enough to separate chiral molecules. Zhao is now quantifying the forces they are able to apply to DNA and certain proteins and the next step with be building and testing a filter to see how it fairs. Said Zhao:

We will put many of these nanostructures on a microfluidic chip where a drug of interest can be introduced. If it works as we want it to, we should be able to have the drug separated upon illumination.

The researchers are optimistic about the potential of their technique to result in an efficient, generalizable tool for chiral molecule separation relatively soon, which could help make certain drugs safer or more effective.