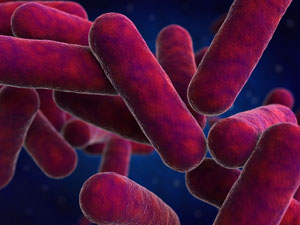 Scientists in China have developed a silicon chip doped with silver nanoparticles that can rapidly detect different pathogens in blood samples. The technique may be a rapid and low-cost alternative to current diagnostic tools.

There are growing concerns within the medical community over the emerging threat of resistant pathogens that, if left unchecked, could lead to the premature death of 300 million people by 2050. With only one new potential class of antibiotic discovered in the past 25 years, some research groups are now investing funds into pre-emptive diagnosis strategies in an attempt to prevent a global health crisis.

‘The rapid, sensitive and low-cost detection of different pathogenic bacteria in clinical samples is essential in preventing … many serious diseases caused by bacterial infections,’ says Yao He from Soochow University in China.

Although there are currently several detection tools available to researchers, the technology cannot keep pace with the community’s need to diagnose patients quickly. He explains that complex biochemical analyses are time-consuming and can suffer from ‘relatively poor sensitivity’.

Surface-enhanced Raman scattering (SERS) may provide a solution to these problems. SERS can distinguish between different molecules by analysing how photons ricochet off them to produce a unique ‘fingerprint’, and the technique has already been successfully applied in clinical studies in the past few years. But it’s been limited in its scope, according to He. ‘SERS methods only focus on the detection of bacteria itself,’ he argues. ‘For the real application of SERS detection of tiny bacteria in clinical samples, it is necessary to develop a highly efficient multifunctional platform.’

He and his colleagues created such a device by embedding silver nanoparticles into a silicon wafer. In order to capture a range of bacteria effectively, the team further modified the chip by anchoring 4-mercaptophenylboronic acid (4-MPBA) – a common bacteria-binding agent – to the surface.

Human blood spiked with Escherichia coli or Staphylococcus aureus was deposited onto the chip to determine whether SERS could distinguish between the harmful pathogens and surrounding blood cells. The researchers found that the SERS chip could detect both pathogens down to concentrations of a few hundred colony-forming units per millilitre. Following detection, the chip killed the bacteria through the slow release of silver anions from the surface.

‘It’s basically discriminating a needle in a haystack – the very low concentration of your target versus the huge amount of interfering molecules,’ says Philip Howes from Imperial College London, UK. Howes comments that demonstrating this technology can work for a ‘complicated biological milieu’ rather than simply a buffer solution is ‘massive’. ‘Work like this where they show their chip maintains its high performance with human blood is a fantastic demonstration of their technology.’

But he is quick to add that the SERS chip isn’t unrivalled in the field and the technology will need further development before being used in a clinical setting. ‘A really interesting next step is to be able to say:  “Can we apply this to actual clinical samples?” – looking at patients with bacterial infections,’ Howes says.