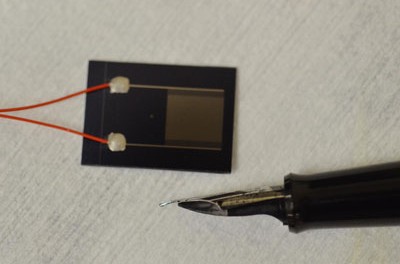 The prototype listeria biosensor chip is a little smaller than postage stamp. Dr. Carmen Gomes, Texas A&M AgriLife Research engineer, said even at this early stage of development, the sensor can detect as little as one bacterium in about one ounce of food product. (Image Credit: Robert Burns)

A Texas A&M AgriLife Research engineer and a Florida colleague have developed a biosensor that can detect listeria bacterial contamination within two or three minutes.”We hope to soon be able to detect levels as low as one bacteria in a 25-gram sample of material – about one ounce,” said Dr. Carmen Gomes, AgriLife Research engineer with the Texas A&M University department of biological and agricultural engineering, College Station.

The same technology can be developed to detect other pathogens such as E. coli O157:H7, she said. But listeria was chosen as the first target pathogen because it can survive even at freezing temperatures. It is also one of the most common food borne pathogens in the world and the third-leading cause of death from food poisoning in the U.S.

“It can grow under refrigeration, but it will grow rapidly when it is warmed up as its optimum growth temperature ranges from 30 to 37 degrees Celsius — 86 to 98 degrees Fahrenheit,” Gomes said. “This makes it a particular problem for foods that are often not cooked, like leafy vegetables, fruits and soft cheeses that are stored under refrigeration.”

Currently, the only means of detecting listeria bacteria contamination of food requires highly trained technicians and processes that take several days to complete, she said. For food processing companies that produce and ship large quantities of foodstuff daily, listeria contamination sources can be a moving target that is often missed by current technology.The bio-sensor she is working on is still in the prototype stage of development, but in a few years she envisions a hand-held device that will require hardly any training to use.Gomes is collaborating with Dr. Eric McLamore at the University of Florida at Gainesville.”I do the biological and polymer engineering; he does the electro-chemistry and nano-structures,” she said.

As for the biological component, Gomes said she is using “nanobrushes” specially designed to grab particular bacteria. The nanobrushes utilize “aptamers,” which are single-stranded DNA or RNA molecules that bind to the receptors on the target organism’s cell outer membrane, Gomes said. This “binding” is often compared to the way a key fits into only one lock. In this manner, the nanobrushes select for only a specific type of cell, which in the case of her work is the listeria bacterium.

Gomes noted that the inspiration for the nanobrushes comes from the Hawaiian bobtail squid, a football-sized creature that forms a symbiotic relationship with bioluminescent bacteria. Microscopic, hair-like structures, called cilia, on the squid’s light organ select and capture the bacteria from a very complex microbial soup of the ocean.” The squid feeds the bacteria sugar and amino acids and in return, the bioluminescent bacteria allow the squid to produce light, which then allows the squid to escape from things that might want to eat it,” she said.

“To predators, the bioluminescence is very similar to the light coming from the moon and stars at night, which acts as a ‘camouflage’ when observed from below. “The selection process the polymers use to select for specific bacteria in the listeria biosensor is very similar to the squid’s cilia. We are trying to mimic the same mechanism of bacteria’s capture used by the squid’s cilia.”

Currently, the listeria biosensor is about the size of a postage stamp, with two wires leading to two etched conductive areas. After a few minutes, when the polymer nanobrushes have had time to grab the selected bacteria, the rest of the sample is washed away and the impedance, or resistance, between the two surfaces is measured electronically.

Gomes and McLamore are moving on to refining the electronics to something that can be handheld and easily used. Also in the works is a disposable paper-based biosensor that can be disposed of after one use.In early April, they were awarded a three-year $340,000 National Science Foundation grant to continue their work on nanobrushes for pathogen detection.